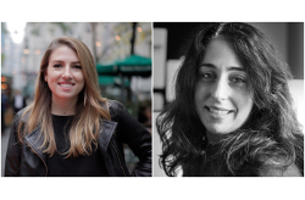 “This has been an exceptional year of growth for Alkemy X — and we still have more developments on the horizon,” remarks Justin B. Wineburgh, President & CEO of Alkemy X. “We continue to grow and refine our business model to best serve our clients with the utmost quality, efficiency and artistic vision. It all starts with attracting the best possible talent in the business, and we have been tremendously successful doing so recently. To this end, Brittany and Maria join Alkemy X at a key point in time, and figure to be tremendous assets, given their professional experience and track records, respectively.”

As Manager of TV & Digital Content at the New York office, George will work alongside Singer to develop original content. Alkemy X’s most recent title in this division is season two of “Unique Rides” on the upscale men's cable network Velocity. In the show, world-renowned automotive designer and host Will Castro builds customized cars for celebrity clients.

“Brittany has worked with some of the industry’s top production companies,” says Singer. “She also has a robust history in the digital landscape. As we expand our development pipeline and partner with on-screen talent, Brittany will be a valuable asset.”

George previously worked at Leftfield Entertainment, which produced FOX’s “American Grit”; History’s “Alone” and “Pawn Stars”; and Bravo’s “Real Housewives of New Jersey.” During her tenure with the company, she developed original content for Discovery, MTV, History, Animal Planet, Lifetime, Snapchat and Vevo, among a variety of cable networks and digital platforms. George was also integral to the growth of Riot Creative, a subsidiary of Leftfield, as well as program development for eight of its other brands.

A Marist alumna, George broke into the professional ranks as an executive assistant at ITV and Leftfield Pictures. Her first taste of the entertainment business was college internships for “Live With Kelly and Michael” and “The Dr. Oz Show.”

“I’m absolutely thrilled to be joining the team and am looking forward to working with Andy in developing new and exciting content for Alkemy X,” says George.

Allen joins Alkemy X from Comcast Corporation. She will lead all of the company's internal financial and accounting initiatives.

Prior to the Comcast/NBC merger, she was an Accounting Supervisor for Comcast SportsNet and the American Board of Internal Medicine, respectively, in Philadelphia. During her nine years with Comcast/NBC, Allen’s responsibilities spanned annual budgeting, long-range planning, forecasting, audits, and monthly close cycles.

Allen will work from Alkemy X’s Philadelphia office. A South Jersey native and Rowan University alumna with a B.S. in Accounting, she says she and her family are ecstatic to be returning home.

“I am really looking forward to joining the very talented team at Alkemy X,” concludes Allen. “I’m up for the challenge and hoping to add value wherever I can.”