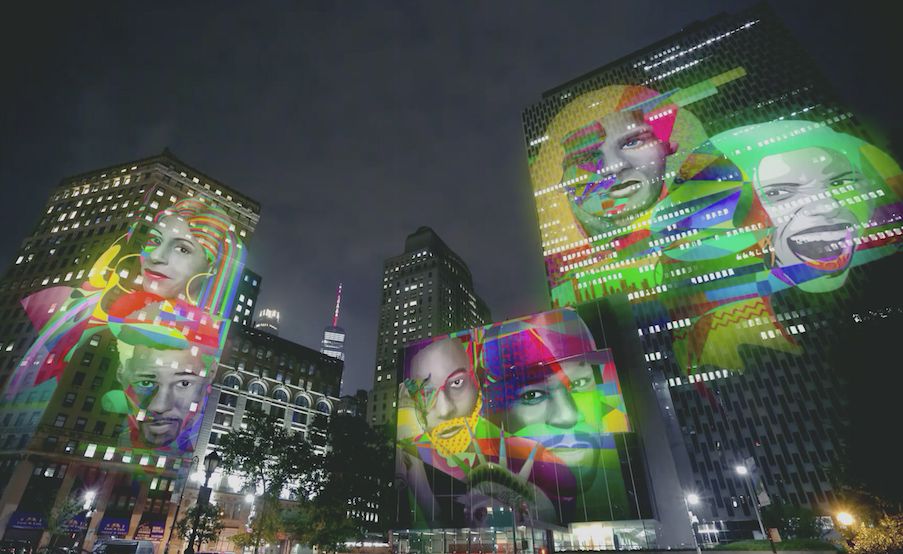 The opening sequence is a larger-than-life portrayal of executive producer Curtis '50 Cent' Jackson standing atop a skyrise as the 'master of ceremonies' introducing the cast of '50 Central,' while electrifying the elements of the New York City backdrop - from rooftops to sidewalks to subway stations.

According to Alkemy X Creative Director Geoff Bailey, the client sought a show open that touched upon several themes that make '50 Central' stand out in the sketch comedy landscape, particularly its unique format, which will feature celebrity guests and aspiring talent looking to make their big break on the big screen.

“In setting the mood for Jackson's ground-breaking spin on sketch comedy, the opening sequence is the viewer's ticket to the most exclusive party in the city, which is the premise of the series itself,” says Bailey. “The underlying challenge was capturing the complete personality of Curtis Jackson, the producer, as well as some of the more playful elements that he embodies. We achieved this by composing and balancing imagery that felt cool, luxurious, energetic and fun.”

Alkemy X enlisted the talents of illustrator Bryan Kai Louie to design a one-of-a-kind original mural that includes Jackson and the five recurring cast members of “50 Central.” In addition, Louie included dozens of 'Easter eggs,' where upon closer scrutiny, viewers will find subtle references to “50 Cent” and his history, as well as the history of hip-hop in New York City.

Bailey and his team conducted the live-action portion of the production with Jackson and the cast during a one-night shoot, as well as several additional nights of shooting plates throughout the city. The team then animated and composited Louie’s mural and drawings into the plates.

“We knew early on that we wanted the opening and graphics package to reference the history of New York City as the birthplace of both hip-hop and street art,” explains Bailey. “Street art is a democratic way in which the city is brought to life by countless people, so we roamed around and studied how street art in the past 20 years has been transformed into a public fine art form.”

Bailey and his team evoked the energy of a late-night city dance club with luminescent accents of colour. Working backwards from the disco ball and club lights flashing in the subway in the final scene - they developed a colour palette that reinforced this idea of the city’s most exclusive underground club.

In addition, Alkemy X worked closely with Largent, the set design company for “50 Central,” to ensure design elements from the open, such as the mural graphics, were reflected in the show.

“Everyone involved was unbelievably collaborative to achieve full alignment with how Jackson, his team and BET wanted to brand and present this show,” concludes Bailey. “Mr. Jackson had a clear vision for this piece from the outset, and leaned on us to take it to the next level from a both a conceptual and execution standpoint. We at Alkemy X are very proud of the result and are excited for people to see such a brilliant side to Jackson in this series.”