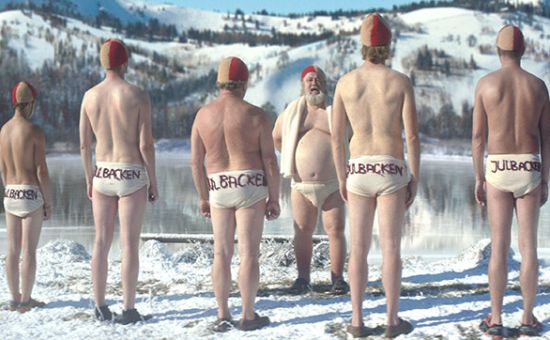 The northern hemisphere has always led us to believe that a white Christmas is the norm. That we should be building snowmen, staying indoors and eating hot foods that are far more suited to a much colder climate. All our rituals, imagery, symbols, songs are born of dreams of perfectly formed falling snowflakes, crackling fireplaces and rich pudding.

ALDI celebrates all the great things about an Aussie Christmas through the eyes of a man named Johan who has returned to his small snow covered village Julbacken after a trip to Australia. He brings with him strange tales of a summer Christmas, many of which seem out of place to the somewhat skeptical villagers.

His attempts to introduce Australian customs to the village makes very little sense at first, managing mostly to upset those stuck in their more traditional ways. As time goes on, the villagers begin to warm to Johan’s new ideas, but it’s his introduction of ALDI’s Specially Selected range that eventually wins over even the toughest of critics – proving that thanks to ALDI, the perfect Christmas, is in fact, the Perfect Aussie Christmas.

Says Alex Booker, BMF Creative Director: "Like any Aussie kid, I’ve grown up feeling our Christmas was inferior to that of our Northern Hemisphere brethren with their trademark white Christmas. It’s time we showed them what it’s like to have an Aussie Christmas and prove that it might just be the perfect way to celebrate Christmas. After all, who can resist a few ALDI prawns and lobster tails after a quick surf and some backyard cricket... even if you have no idea what you’re doing”.

Says ALDI spokesperson: "Having grown up in Australia, my memories are of hot Christmas days, barbecued prawns and backyard cricket. We are all excited that ALDI’s premium Specially Selected range has been brought to life with a campaign the celebrates the uniqueness of an Australian Christmas.”

Stephen McArdle, BMF Managing Partner added “The challenge ALDI set us and themselves is to keep surprising and delighting customers with the offers, products and advertising we put in front of them. I don't think we've ever delivered better against that challenge than with this Christmas campaign. It's an absolute cracker!”