ALDI Challenges 'The Unconvincibles' to Switch in New Spots from BMF 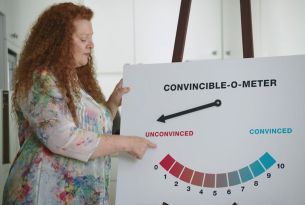 Last year ALDI launched the ‘Supermarket Switch Challenge’, a campaign that put real people who had expressed a dislike for ALDI and its quirks, as the stars of its advertising. A friend or family member who loved ALDI, attempted to convert their sceptic, and it worked. So much so, that 661,000 new households started shopping ALDI and the campaign proved to be the most effective to date.

To build on the success of the original campaign, it was time to find even more extreme ALDI sceptics – a group of seemingly un-switchable shoppers.

Introducing: ‘The Unconvincibles’, a group of Australian grocery shoppers that have the most extreme negative attitudes towards ALDI. They’re the kind of people who say “I’d never shop at ALDI” and are quite good at giving seemingly rational reasons why. But when you scratch the surface, these reasons don’t stack up.

“It was actually quite tricky finding people who are such staunch rejecters of ALDI. We did a call-out on Facebook, did street casting and ran focus groups, but most people were simply too easy to convert. In the end, we found four Unconvincibles that each had their own idiosyncratic reasons for never shopping at ALDI. While these barriers were deal-breakers for them, they actually reflect the more widely-held misconceptions about ALDI amongst Australian shoppers,” explains BMF Head of Planning, Hugh Munro.

“Unscripted ads are great fun to make, especially with characters as vocal as this. Their awkward pauses and the offhand comments give the campaign an authenticity other retailers won’t go near. For ALDI to let its fiercest critics call them out on national TV – never knowing whether they’d be be able to switch them or not – is a real statement,” says BMF Group Account Director, Toby Hussey.

ALDI Marketing Director, Sam Viney, adds, “Tackling the misconceptions and doubts about ALDI proved very effective. So we went at it again, going deeper and challenging the ultimate sceptics. After all, if we can persuade our most hardened critics, I am sure we will convince even more Australians to shop at ALDI.”

The new campaign is integrated across the path to purchase: from TV and catalogue to digital, print, and point of sale.