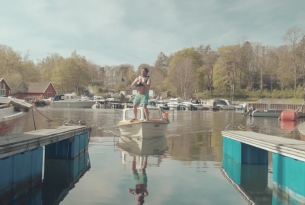 The Norwegian alcohol awareness non-profit AV·OG·TIL commissioned Stavanger based agency Melvær&Lien to launch its new campaign. The brief was to raise awareness of the negative effects and dangers of drinking alcohol while maneuvering a boat. This resulted in the birth of a carrot tanned hero who shows that docking is an art-form, best executed stone cold sober.

The Norwegian version was released just before the weekend and was immediately picked up by boating enthusiast all over the world's maritime nations.

The lead character in the movie is played by a local lad from Stavanger, an engineer who has never done any acting before in his life. "He was basically the only guy we found willing to cut his beard in this fashion and spend a lot of time self tanning," commented Melvær&Lien.