Awards and Events 334 Add to collection 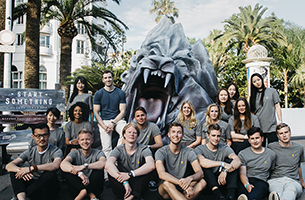 AKQA has announced the winners of Future Lions, the official student awards at the Cannes Lions International Festival of Creativity. Over 1,900 students from 69 countries participated, making it the most entered and competitive year.

The five winning ideas and teams are:

Berghs School of Communication is named Future Lions School of the Year, having received more shortlisted finalists than any other school. This is the third year in a row that Berghs has won this recognition.

Each winning team and Berghs School were awarded with the iconic Future Lions trophy on stage in the Debussy Theatre at the Cannes Festival Palais. Torsten Schuppe, Google’s Senior Director, Brand and Consumer Marketing EMEA, presented the School of the Year trophy. The ceremony was hosted by AKQA CEO Ajaz Ahmed and Group Creative Director Ian Wharton.

Ajaz Ahmed said: “Future Lions is a canvas where the next generation of talent unleash the start of their creative potential, sowing the seeds of an enterprising and rewarding career.”

Now in its 11th year, AKQA created and led the Future Lions program since its inception in 2006. The competition has launched the careers of over 60 of the most talented young creatives.