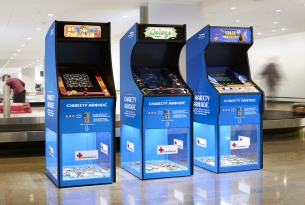 Ms. Pac-Man, Space Invaders and Galaga – people visiting Sweden can now play some of the most celebrated and cult-declared arcade games while at the same time make use of their left-over travel coins, as they get donated to the Red Cross.

The three arcade games has been custom-made in order to work with all types of currencies that travelers may bring to the table. This way visitors can take a trip down memory lane while at the same time tribute to the greater cause. All money received from Charity Arcade will, without exceptions, be donated to the Red Cross and it’s operation.

Behind the project is Stockholm Arlanda Airport and the Red Cross. Together they have developed the more refined version of the old donation can that will make every nostalgic gamer satisfied.