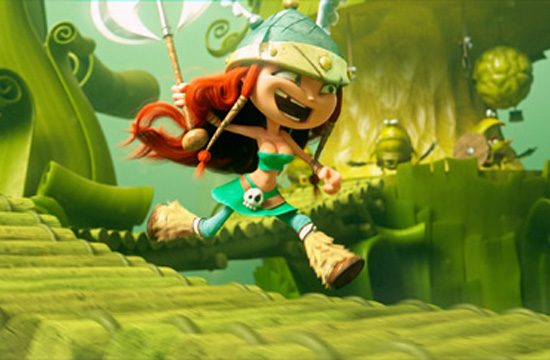 Motion Theory (MTh) directorial team Akama was recently tapped by Ubisoft to create a short animated trailer for the upcoming platform game Rayman Legends. Debuted at the 2013 Electronic Entertainment Expo (E3), Akama’s Alexandre Ada and Cedric Jeanne handled everything on the project from design and modelling to effects and animation.

After discussing concepts with Rayman game designer Michel Ancel, Akama created a storyboard and an animatic to guide production. Given the depth of the game, it was a challenge to select which aspects to highlight. Ultimately, the trailer serves as an introduction to Barbara, a new battle-axe wielding character that is outfitted in a Viking-inspired getup and sports long tresses as fiery as her personality.

“Barbara is never afraid, can endure tough situations and is a scrappy fighter. We had to make sure all that was conveyed within a short amount of time, while also featuring interesting game environments and a few enemies. We also wanted to match the visual tone of the game, making everything bright and colourful,” explained Alexandre Ada, Akama.

Using hundreds of drawings, pictures and matte paintings of Rayman Legends as reference, Akama was also inspired by work from various animated films and images by different artists. Leveraging a deep creative technology background, the pair completed the roughly :60 trailer in only two months.

“The Rayman universe is exciting so we really enjoyed working in it and we are proud of the end result,” Ada said.

The multiplayer, cross-platform title is slated for a September 3, 2013 release.