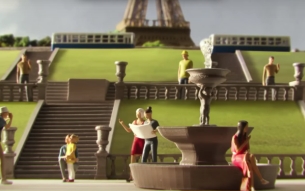 TBWA/Singapore has teamed with Yippee Ki-Yay, specialists in models and miniature sets and Photoplay Film to launch a new campaign for Airbnb titled 'A Different Paris'.

In the 60 second film we see the Chinese heroine reminiscing about the time she spent exploring Paris thanks to the recommendations from her Airbnb host. Her memories of the “real Paris” are brought to life in a stunning visual execution using a zoetrope, one of the oldest pre-film animation devices.

Measuring 3.8 meters in diameter, 11.9 meters in circumference and 1.5 meters in height, the 3D zoetrope was handmade and is a first-of-its-kind. It went from drawing board to finished structure within a period of 3 weeks and was furnished with an estimated 11,256 parts that include 1,476 figurines to create the illusion of seamless motion.

In the words of Airbnb CMO Jonathan Mildenhall: “Traveling on Airbnb unlocks magical moments – our hosts and their homes create a sense of real belonging for travelers and this feeling is amplified when they discover the city through the eyes of their hosts. This film is showing, in true Airbnb fashion, how the ordinary world can become an altogether different, more magical world.’’