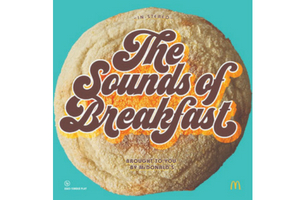 McDonald's worked with Air-Edel's Roger Greenaway on their new 'The Sounds of Breakfast' jingle - they teamed up with Golin's Chicago office to produce the song which was released this week which features Madeline Bell as the lead vocalist.

The jingle was recorded and mixed by Nick Taylor in Air-Edel Recording Studios. Nathan Klein orchestrated the track and Emily Appleton Holley was the music supervisor.