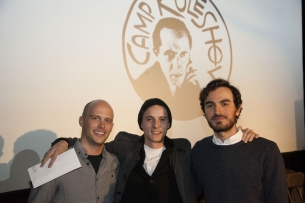 The first AICE Chapter to hold a 2015 Camp Kuleshov trailer competition for assistants has selected its winners.  First Place went to Assistant Editor Jes Frigon of By The Booth for his trailer that recasts “Office Space,” the classic Mike Judge 1999 comedy about cubicle drones, into a foreboding thriller. To view the entry, click here.

Second and Third Place honors both went to assistants at Relish. Assistant Scott Edwards won for “Weird Science,” in which he re-imagined the 1985 John Hughes classic about two nerds who attempt to create their perfect woman as a Quentin Tarantino film. To view the entry, click here.

Coming up next on the 2015 International Camp Kuleshov competition circuit are events taking place on Oct. 28 in New York, Chicago, Los Angeles and San Francisco, with additional CK events set for Detroit on November 3 and Dallas, sponsored by the Texas Chapter, on November 5. The Dallas event will coincide with the association’s semi-annual International Board Meeting being held there.

AICE announced in August that its Camp Kuleshov competition had gone international, with a unified format that has all assistants taking part in the various chapters working from the same creative briefs, entry rules and source films.

By the Booth’s Frigon is now eligible to be voted the overall International Camp Kuleshov winner, which will be announced once all participating chapters have named their top winners. In addition to taking home an iMac – generously donated by Avid resellers AVI, CineSys-Oceana, Cutting Edge, HB Communications, KeyCode Media, Melrose MAC, T2 Computing, TM:Television and Vintage King Audio – as well as local bragging rights, the chapter winners and the overall winner will be feted at the 2016 AICE Awards presentation in Chicago, where the AICE’s first trailer competition was held.