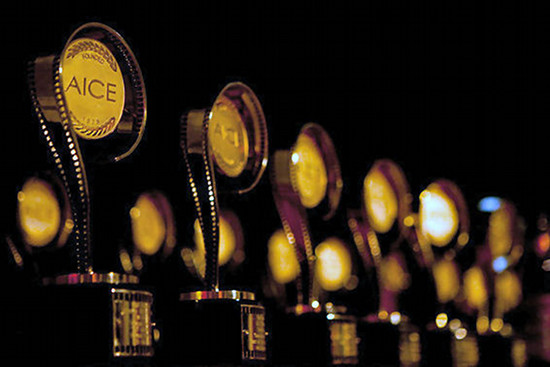 AICE has announced the Call for Entries for the 13th annual AICE Awards competition, the premiere creative competition for the post production industry in the US and Canada. The 2014 AICE Awards includes 21 categories, 16 for editorial and 5 for other post production crafts such as audio mixing and color grading. Winners will be announced at the AICE Awards Show, set for Thursday, May 15, 2014, at Guastavino’s, the glittering event space on the East Side of Manhattan.

The deadline for entries is Friday, February 14, 2014. Full descriptions of categories and entry requirements can be found at www.aice.org.

For the first time a Best of Show winner will be chosen from among all the winners by the AICE Awards Curatorial Committee. Craig Lewandowski, an editor at Optimus, Chicago and a member of the AICE Awards Committee, predicts heightened anticipation with the introduction of the Best of Show award. “There’s something really cool about getting a Best of Show award in a competition,” he says. “It’s great to be honored in the category you enter, but there’s always a lot of anticipation around who’ll be named Best of Show.  We’re expecting a lot of excitement around the addition of this new feature to the awards.”

Lewandowski and fellow committee members Chris Franklin, Editor and Owner of Big Sky Editorial in New York and Bob Spector, Editor at Beast in San Francisco revised and updated the category definitions so they align more closely with the ever-changing media landscape. For example, the Alternative Media category was broadened and a new Online Campaign category was added.

“We’ve taken what used to be one category for Alternative Media and broken it into sections that better describe the types of projects our members are working on,” Lewandowski explains. Aimed at work that has been commissioned by a client specifically for an alternative (i.e., non-broadcast) media platform such as the web, there will now be two separate categories, one for entries under 90-seconds in length and the other for entries over 90-seconds.

“The committee worked hard to refine the category definitions based on the feedback we’ve received from our members,” says Burke Moody, Executive Director of AICE. “They arrived at these new time distinctions for Alternative Media because it is difficult to make compare and judge a 30-second piece and an eight-minute piece in the same category.”

“Our members wanted to enter campaigns that were built for the internet, and an internet campaign, by definition, is global – it’s not dependent upon a broadcast, cable or satellite signal,” says Moody.  “So the Online Campaign category was added in response to what we were hearing from our members.”

“More and more people are editing pieces that are either meant for multiple channels or will never be broadcast at all,” says Lewandowski.  “We believe these changes give people more options for where and how to enter their work.”