To wake up the new UOL 89FM radio station 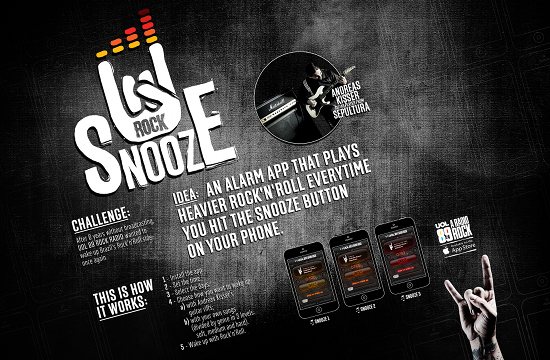 To wake up the new UOL 89FM radio station, Agencia Africa created an app that is not for the faint hearted. The ‘Rock Snooze’ is a free alarm app for those who like to wake up to a powerful sound.

Sepultura’s front man, Andreas Kisser, who is a radio presenter at UOL 89FM, is responsible for guitar riffs used in the alarm app. Every time you hit the snooze button, the music gets heavier. If this musical arrangement gets too overwhelming you can always wake up to the UOL 89FM’s programming sound. The mobile technology focusing on interactivity, usability, and design, has been developed in partnership with Instituto de Artes Interativas (Interactive Arts Institute).

The UOL 89FM radio station adopted a new name to mark a return to its rock roots. The re-birth of the station is creatively led by Agencia Africa and has resulted in the radio station becoming the fastest-growing in Brazil in just one month, according to IBOPE (The Brazilian Institute of Public Opinion and Statistics).

Sergio Gordilho, Agencia Africa’s co-president and Chief Creative Officer says: “Since the 89FM has been asleep for six years and has now come back in full strength, there is nothing better than a powerful wake-up call to mark the occasion.”

The ‘Rock Snooze’ app is available for anyone using an iPhone, and can be downloaded at: https://itunes.apple.com/us/app/rock-snooze/id634902973?ls=1&mt=8