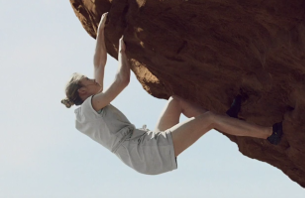 Wieden+Kennedy London releases a new campaign ‘Up’ for the new Honda Civic, featuring Imogen Horrocks, rising star of the climbing world and a member of Team Great Britain. ‘Up’ is a metaphorical film about the challenge that Honda faced, and embraced, in the creation of the all new Civic. We follow a young woman as she leaps from a ladder, the safe and predictable path, to climb a giant clay mountain made of Civic parts. She is finally rewarded as she reaches the top and sees the new car for the first time. It’s a story about the struggle of bringing an idea to life, the young woman and her heroic ascent representing Honda and their own daring engineering journey. The clay mountain is based on the clay used in the design process of the car. Designers and engineers spent years developing the shape of the Civic to give it its new advanced and sporty style. Similarly, W+K worked closely with artists and designers at MPC London to develop and craft the world you see.

Long ago, Soichiro Honda, the founder of Honda, uttered simple but extremely powerful words; “Instead of being afraid of the challenge and failure, be afraid of avoiding the challenge and doing nothing”. Unsurprisingly this quote has been the driving force behind everything Honda has done ever since. Today, when it seems that iteration has become the norm. Where it has become acceptable to settle for ‘OK’. Where tweaking rather than radically changing is the way things are done. This attitude has never been more important.

Scott Dungate, creative director at W+K London said “'Soichiro Honda encouraged engineers to be brave in their design, even if it meant leaving all they know behind. They had a phrase for this 'kick the ladder out' which meant engineers couldn't fall back on the steps that got them to where they are today. They had to find a new path. This is why each generation of Civic is generally a big step change inside and out, rather than just an iteration on the last model. 'Up' aims to bring drama to this 'Hondaism', while introducing the all new Honda Civic.'”

Jonathan Allee, European Communications Manager at Honda Motor Europe commented “Brave, innovative, visually stunning and forward thinking, 'Up' encapsulates our core values here at Honda as we adapt to the challenges of an ever-changing world."

The Honda Civic campaign “Up” will air on Saturday 25th February with a 30 second TV spot during ITV’s The Voice. 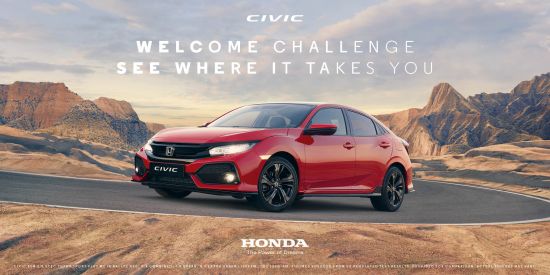