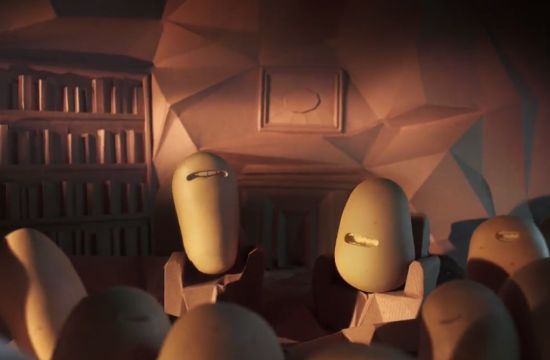 Aesop Agency, the brand storytelling agency has created a playful campaign for GreenVale – one of the UK’s leading suppliers of fresh potatoes.

The 30” ad uses stop-frame animation to bring the GreenVale potatoes to life and was produced by award-winning animators Blinkink and features the voices of actor Stephen Mangan and comedian Marc Wootton.

Set within the confines of a bag, the ‘chatty’ potatoes muse on what it means to be a GreenVale potato, swiftly escalating into a tongue-twister before concluding with the end-line “So tasty, they speak for themselves”.

“Potatoes are a commoditized product’ says Martin Grimer, Executive CreativeDirector, Aesop Agency “ and the challenge was to connect with the consumer, communicate the GreenVale taste difference and deliver category cut-through – and what better way than to create a witty ad where the cheeky spuds get to speak for themselves!”

The £1.5 million campaign - the first for GreenVale Potatoes - will launch on Monday 3rd Feb and will run for five weeks across all key stations including ITV, Channel 4 and Sky.

Commenting on the ad, Leon Mundey, Head of Marketing, Greenvale AP says: “In the two years GreenVale Potatoes have been available, we’ve been overwhelmed by the positive response we’ve had from consumers and have developed a really loyal consumer following. We believe that this ad, which is good fun but which also communicates our key messages of taste and freshness, will deliver a real step change in consumer awareness and growth for the brand”.