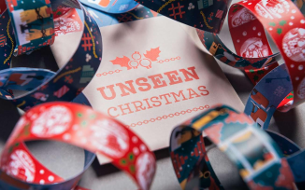 Aesop, the brand storytelling agency, has created a compelling Christmas campaign for the modern slavery charity – Unseen. Working with a number of the UK’s top illustrators – Aesop has devised a unique campaign that uses paper chain strips to illustrate stories of modern slavery.

“From a distance the paper chain designs appear traditionally festive,” explains Stephen Lynch, Creative Director, Aesop Agency “But on closer inspection the ‘unseen’ stories reveal themselves. We all have memories of making paper chains as kids – we felt it was the perfect analogy for focusing attention on the unseen victims of modern slavery”. The stories depicted represent an estimated 13,000 victims of slavery in the UK.

Commenting on the campaign Andrew Wallis OBE, CEO of Unseen says: “We are absolutely delighted to be partnering with Aesop Agency and some of the UK’s top illustrators to make the hidden nature of modern slavery in the UK seen. Often this crime and the exploitation of people is hidden in plain sight and the psychological chains that hold people in situations of modern slavery are very real. The UK’s Modern Slavery Helpline run by Unseen allows: victims to call safely for help and assistance; the public to call with tip-offs and concerns and business and statutory agencies to seek support and assistance.”

The limited run Unseen paper chains (8ft in length when put together) are available to buy exclusively from unseenchristmas.com priced at £7.95, with all monies raised going to the charity. People can also make a donation and download the designs to decorate their offices and homes, helping to spread the stories and raise awareness of modern slavery.

The story of Asif illustrated by Andrew Rae

The story of Grace illustrated by David Doran

The story of Manisha illustrated by Tom Jay

The story of an Unseen project worker illustrated by Radio