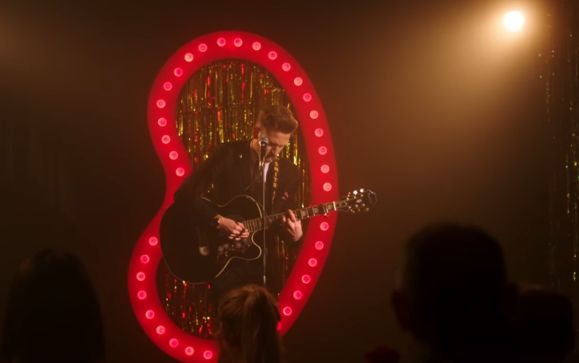 Aesop Agency has created a Valentine’s Day campaign for NHS Blood and Transplant designed to encourage people across the UK to consider transforming lives by donating a kidney to someone in need, be they a stranger, friend or loved one.

Less than half (48%) of adults surveyed recently by NHS Blood and Transplant were aware of living kidney donation. However, when they were subsequently asked whether they would consider becoming a kidney donor, the majority (61%) said they would.

Set in a London working men’s club on Valentine’s night a small crowd of loved-up couples are waiting to be entertained. Expecting a romantic ballad they are treated instead to an acoustic version of a song that features the immortal lines;

"I’d give you my heart

But I’d have to be dead

And I just got a free trial on Amazon Prime

So please have my kidney instead..."

Intercut with a number of awkward and unexpected audience reactions – the film features ‘cameos’ from a number of popular characters from last year’s Better Left Unsaid campaign – a trio of films capturing what not to say on a Valentine’s date.

Commenting on the campaign, Stephen Lynch, Creative Director, Aesop says; “Although living organ donation didn’t seem like a natural fit with Valentine’s Day at first, the idea of someone wanting to give away their kidney rather than their heart made sense somehow. It also offered up an opportunity to use humour to achieve standout for a very serious topic.”

Currently almost 5,000 people are waiting for a kidney in the UK – more than the total number of people waiting for any other organ combined.

“More than 250 patients died last year waiting for a kidney transplant due to a shortage of people willing to donate after their death or during their lifetime” explains Lisa Burnapp, Lead Nurse for Living Donation at NHS Blood and Transplant “Living donation is highly successful and thousands of people have had their lives transformed thanks to people willing to give a kidney whilst they are alive.”

The film will feature on a number of social media platforms including Facebook, YouTube and Instagram. The campaign also includes a number of spoof album covers that will be posted each day on Twitter in the run up to Valentine’s Day.

Talking about the campaign comedian Alex Smith says; “I think, just like the vast majority of people, I had no concept that anonymous organ donation was even a thing. So to have the opportunity to help change that and raise awareness was an easy ‘yes’... and we’ve created something genuinely funny and informative that will hopefully save lives.”