AELTC Gets Visitors into Championship Spirit 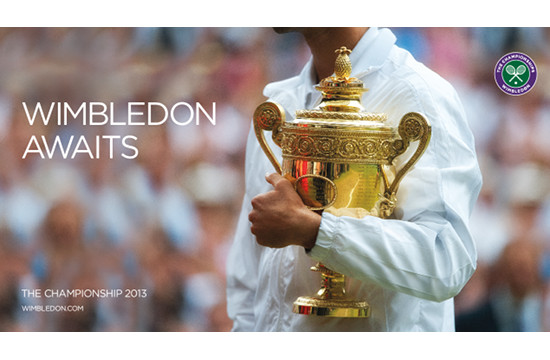 The All England Lawn Tennis & Croquet Club (AELTC) is set to build anticipation for visitors descending on the Wimbledon area for the 2013 Championships, through a creative campaign developed by integrated marketing agency Space.

The activity focuses on an overarching theme devised by Space, called ‘Wimbledon Awaits’. This idea serves to give a sense of scale and excitement around The Championships and provides a theme that can be campaigned to communicate all the thrilling experiences and adventures that can happen during the iconic Wimbledon fortnight.

Space’s campaign serves to build excitement and anticipation for tennis fans as they make their way to The Championships. Visitors experience a taste of Wimbledon and the enthusiasm for their day ahead builds through a series of touch points starting with their journey from Wimbledon station, up to the grounds and the golf course queue.

As part of this communication, the AELTC has secured the media rights for Wimbledon train station. This way visitors can be reminded of what to expect from their day at The Championships. Space has utilised iconic Wimbledon photography, accompanied by a range of messages to engage visitors, such as ‘Tradition Awaits’, ‘Drama Awaits’, ‘Legend Awaits’ etc.

A diverse range of media is used at Wimbledon station, including a large roadside outdoor site, station exit archway, the travel queuing system, brochures and information sites. In keeping with the premium traditional feel of the media communications, Wimbledon stewards will also be at the station to direct visitors towards the grounds.

In another first for the AELTC a 20m panelled walkway has been added to the golf course queuing system as a means of further developing the ‘Wimbledon Awaits’ messaging. This features emotive imagery from the AELTC Championships archive along with dramatic facts and stories about the players and the grounds that make up the history of Wimbledon. This will entertain the dedicated tennis fans hoping to enter the grounds. Full-sized replica gates, an entrance tunnel, popular player silhouettes and tennis netting fencing have been included to further build the branded experience.

David Atkinson, managing partner at Space said, “The Championships are very special and totally unique. Our brief was to capture that atmosphere of thrill and delight, and amplify it. Our ‘Wimbledon Awaits’ initiatives immerse visitors in the premium world of the Wimbledon brand as soon as they step foot out of the station and means they are carried along a seamless journey through to the grounds and the excitement of the tournament itself. Quite simply visitors to SW19 will have begun their immersive Wimbledon experience long before they arrive within the hallowed walls of the Club.”

James Ralley, marketing manager at the All England Club, said, “We cater for thousands of groups and individuals making their way to Wimbledon during the tournament. Some people have tickets, some people don’t, and the anticipation of getting to see the matches is second to none. The most important outcome for us is that people enjoy their experience at Wimbledon and want to talk about it not only during the event but long after.

“The matches are clearly the main event at The Championships, but it’s important to give fans a premium experience in line with our heritage as one of the leading sporting events in the world. The work that Space has done to deliver to this standard is impressive and perfectly meets the brief we gave them.

“This year we are extending the Wimbledon Experience outwards through digital and physical  touch points including a new iPad app, a refreshed website and the media rights for Wimbledon train station. The station is an iconic place of departure for people visiting the Club and Space has been pivotal in communicating that experience clearly and creatively not only to fans but importantly also to the local community and commuters.”