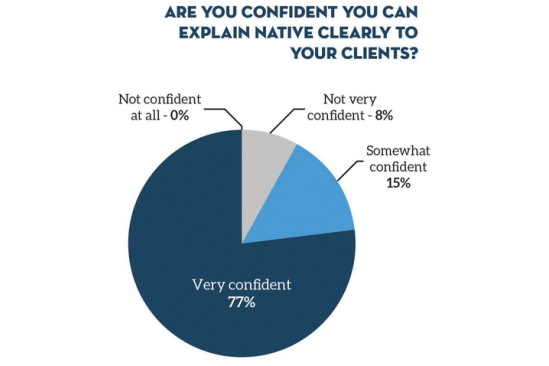 New research has revealed that the UK’s native advertising market is set to grow massively over the next two years, but confusion remains over its exact definition and where budgets are going to come from within agency departments. It is the first ever annual study of UK agency and industry attitudes to native advertising.

The independent survey was commissioned by native advertising platform Adyoulike and covered all major agencies across the UK. It revealed that a massive 83 per cent of agencies now include native advertising as part of their digital offering – and the remaining 17 percent say they’re planning to do so in the near future.

Although in most cases native doesn’t have a dedicated budget, UK agencies currently estimate it will account for an average of 9.2 percent of their total digital display spend in 2014. That figure is further estimated to grow to 14.7 percent in 2015.

The key driver behind this growth is the continued ineffectiveness of display advertising. Furthermore, the agencies surveyed see awareness, brand engagement and consumer education as the top three roles of native advertising campaigns.

But while most UK industry professionals see the potential of native advertising for reaching increasingly sophisticated consumers in premium publisher environments, the study also highlights some of the existing challenges agencies face when looking to run native advertising campaigns.

Key areas of concern cited include how to effectively scale native advertising, sourcing relevant content, the client sign-off process for content and effective measurability. In addition, six out of ten agencies (63 percent) were unsure the sector was effectively regulated and only a quarter (25 percent) were convinced that effective regulation currently exists.

Francis Turner, managing director of Adyoulike UK, comments: “Native advertising continues to grow in the UK and our in-depth agency study shows that brand marketers are fully engaged with the medium. Native advertising offers engagement, a clear voice and opportunities for brands that traditional display cannot compete with; it also works across platforms – tablet and mobile – that other digital advertising types simply cannot do.

“But there are some significant challenges still. The survey highlights that agencies are particularly interested in the issues of scaling native advertising, effective regulation and overcoming some of the perceived issues around content creation. These are issues that specialists such as native ad-tech providers are working to address for brands.”

The study also revealed that three-quarters (77 percent) of agencies are now confident about explaining native advertising to clients, despite continuing concerns over definitions.

Francis Turner continues: “The positives from the study are that agencies, brands and publishers alike have recognised the opportunities that native offers. The excitement about the medium is palpable to see.”

The research was conducted on behalf of Adyoulike UK by FaR Partners & the full infographic can be viewed here.