Advertising expenditure growth of 3.2% is forecast for 2017, according to the definitive AA/Warc Expenditure Report, which today published spend data for Q3 2016 – the first full quarter after the vote to leave the EU.

“That adspend held up after the referendum is another marker of the strength of the UK’s advertising and media industries. As the Government gears up for Brexit negotiations and a new industrial strategy, it must prioritise protecting this global advantage.”

“Drawing from over three decades of unique and extensive industry data, we know that the amount spent to reach consumers has never been greater. Advertising on social platforms, particularly via mobile devices as native articles and videos, will continue to garner surging investment this year as marketers shadow media consumption habits. Yet despite this emerging trend, the TV spot, an industry staple, will remain the largest display format by spend in 2017.”

The Advertising Association/Warc Expenditure Report is the definitive measure of advertising activity in the UK. It is the only source that uses advertising expenditure gathered from across the entire media landscape, rather than relying solely on estimated or modelled data. With total market and individual media data available quarterly from 1982, it is the most reliable picture of the industry and is widely used by advertisers, agencies, media owners and analysts. 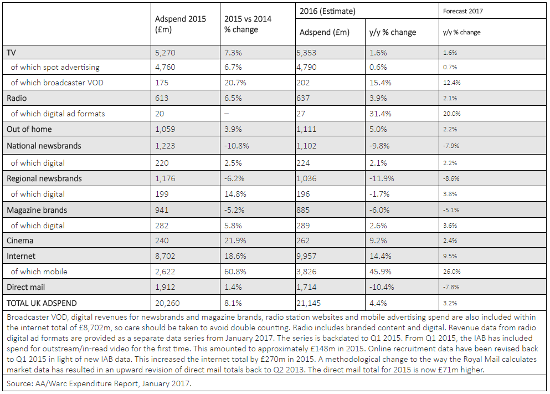