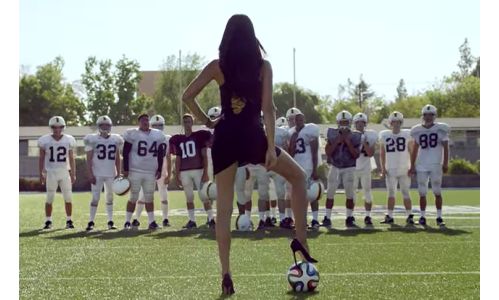 As one of FIFA’s Official Automotive Partners through 2022, Kia Motors has commissioned World Cup Ambassador and Brazilian supermodel Adriana Lima to help spread the passion for fútbol in a new brand campaign.

This is the first time Kia has supported its World Cup sponsorship with a large campaign effort in the U.S.  While most World Cup advertisers will focus on the “avid fan” through athlete-centered messaging, Kia aims to excite the avid fan while making introductions for the "casual fan."

In the TV spots, Lima seeks out non-soccer fans in hopes of converting them into fans of “fútbol” for the month. Each time, she arrives in a Kia Optima or Sorento, making an entrance that will light up the screen, and the eyes, of every sports fan. The campaign tagline: For One Month, Let’s All Be Fútbol Fans.

The work will launch in both Hispanic media and general market TV on Thursday 6/12, running on all ESPN properties (including ABC) for six weeks.