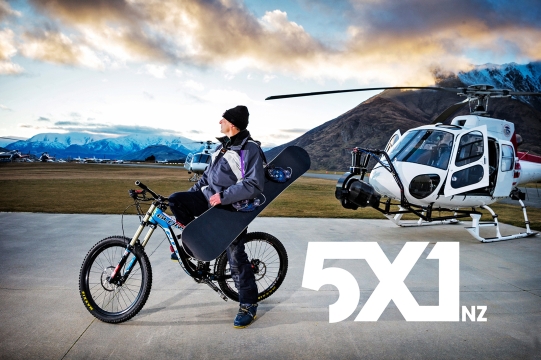 Tourism New Zealand, in partnership with STA Travel, has launched a world first adventure sports tourism product, the 5X1NZ. Visitors to New Zealand will now be able to book an adrenaline seeker’s ultimate dream – the chance to complete five of the world’s most exhilarating adrenaline sports, within a single day. These include a skydive, snowboard, mountain bike, bungy and jetboat, one adrenaline filled epic experience after the other.

To demonstrate the new experience, Whybin\TBWA Sydney and Eleven PR worked with film director Justin McMillan and extreme athlete Chuck Berry to film a non-stop action sequence, during which Chuck completed all five sports within a single hour. The film, a behind the scenes edit and further details of the experience are available to view here.

Kevin Bowler from Tourism New Zealand said, “Last year we had over 500,000 young travellers to New Zealand. People come here because they know they’ll have a life experience worth remembering and because there’s so much to do in such a small space that their trips will be packed full of memories. The 5X1NZ is just one more thing to add to people’s bucket list of things to do whilst they’re here.”

Adam Lee, Group Head, Whybin\TBWA Sydney commented, “The 5X1NZ is a great concept for two reasons; it makes people wonder and talk about what it must be like to do all five sports in a single day and it demonstrates how many amazing things you can do in New Zealand in such a small area. The film isn’t just sharable, it’s motivating too.”