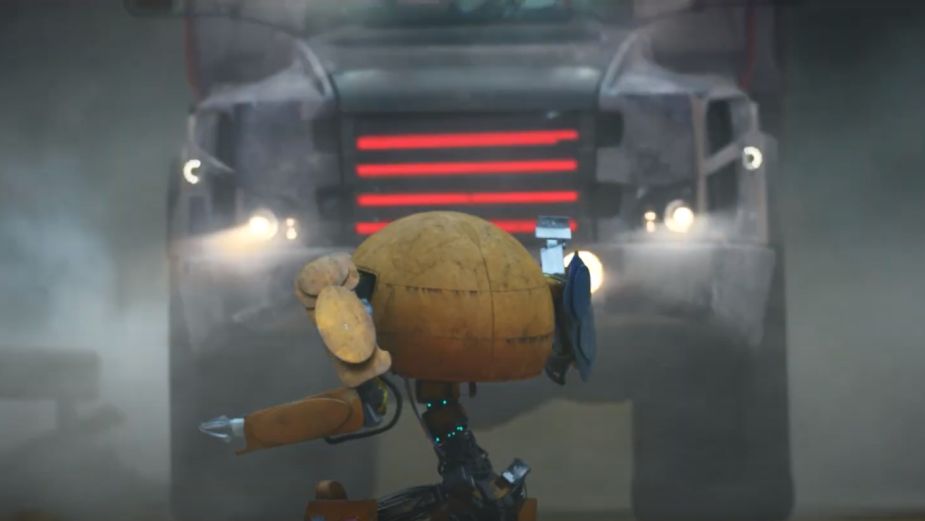 IKEA has announced the launch of a new integrated campaign that aims to inspire people to make easy and affordable swaps around the home to help tackle climate change.

‘Change a bit for good’ challenges the notion that sustainable living must be complicated and expensive, debunking the myth that it is for the privileged few. A few people going to eco-extremes is good, but everyone doing a little bit is much better.

The campaign will appear in broadcast TVC and VOD across the UK and Ireland from 24 May 2021, as well as in the USA and Netherlands. Social, radio, display and OOH will follow on 31st May.

The TVC starts with a little robot humming down a city street. As he approaches a cinema, he looks up to a billboard advertising a film that shows huge machines heroically saving the world. He focuses on the movie’s tagline 'save the planet' and feeling inspired, sets off to do just that.

First, he visits a polluted stream and tries to remove a plastic bag from the riverbank, but the wooden plank he’s balancing on soon breaks and he falls into the water and short circuits.

Next, he visits an enormous factory pumping black smoke into the air. He spots a truck approaching and gallantly attempts to block it from entering the complex by standing in its way. As it comes hurtling towards him, tensions are high – he's not moving, and the truck isn't slowing – but as it approaches, we realise the truck is much taller than him, simply passing right over him.

Finally, during the little robot's last heroic mission, we see him visit a beach that has been hit by an oil slick. He pulls out an impressive looking suction device to suck the oil up, decanting it into a bottle. But as he holds the bottle proudly, he looks up, and we realise there is still a gigantic oil field still to clear – it seems far too much for the little robot to accomplish alone.

He finally heads home, looking dejected and defeated. He's battered, bruised, and far from the optimistic figure we saw at the start of the ad.

However, as he walks through the front door to his home, he notices something different. His whole pad has been given a sustainable makeover with plants, recycled textiles, and rattan furniture.

His robot dad is cooking a delicious plant balls dinner whilst his mum returns from the shops with fresh vegetables in reusable KUNGSFORS net bags. Meanwhile, his sister is using the IKEA FLISAT trolley to grow vegetables, with VARDAGEN muffin tins filled with growing herbs.

Suddenly the little robot has a short circuit caused by a few drops of water still inside him from the beach earlier. A fizz, a spark, and his face display glitches briefly before rebooting. He shakes his head to clear the water before joyfully joining his sister in making small plant pots.

The voiceover proclaims: Change a bit for good. IKEA. The Wonderful Everyday.

Alongside the TV ad, IKEA has a range of OOH and social going live from 31 May, which aims to bring to life the small acts that make a big difference. A suite of assets show plastic bags transform into reusable netted bags, whilst disposable coffee cups flip to reusable cups.

What’s more, IKEA has created a ‘Choices for Change Tracker’ which shows the positive impact its customers actions are having on the environment. For example, the tracker details how much carbon has been saved by people choosing to eat plant balls instead of meatballs (they have just 4% of the carbon footprint); how many kWh of energy have been saved through people purchasing LED light bulbs; as well as the number of pieces of furniture given a second lease of life through its new Buy Back scheme, which launched on 5 May 2021 and enables customers sell items back that they no longer need before IKEA finds them a new home.

As well as showcasing the collective efforts of the nation, IKEA family members will also have the opportunity to receive personalised updates on how their purchasing habits have helped protect our planet.

Kemi Anthony, marketing communications manager at IKEA, said: "We've set the ambitious goal of becoming fully circular and climate positive by 2030. But it’s not just about how we do business, but also about wanting to inspire and support customers in taking action too. Many people still believe that more sustainable living is a choice only available to the privileged few, which doesn’t have to be the case. With this campaign, our aim is to democratise sustainability, demonstrating how easy it actually is to make very simple, affordable and meaningful changes.”

Despite the disruption caused by the pandemic, in the financial year 2020 the Ingka Group produced 132% more renewable energy than it consumed in its global operations for the very first time*. Sales of IKEA's People and Planet Positive products were particularly strong, representing 30% of the total volume of products sold over the year.