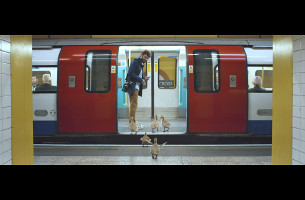 The latest commercial in the O2  ‘More For You’ campaign by creative agency VCCP, directed by Academy’s Si & Ad, features a gaggle of fluffy baby geese as a metaphor for its network coverage.

Following their prowess in creating the photoreal CGI dog ‘Jeremy’ for the Beagle Street campaign earlier this year Finish were called on to create CGI goslings to enable creative control over character and behaviour.  Training live animals, let alone those of the avian variety, is nigh on impossible for any live action film.

Using extensive references of anatomy and physiology, the goslings were built in the digital environment from the skeleton up. Although the viewer only sees the realistic feathers and movements of the finished birds in the commercial, an anatomical structure built below the surface directly affects the realism of joint and muscle movement when animated in CGI.

Finish Supervisor Harin Hirani comments, ‘The little birds had a lot of complex layers under the skin. We built individual skeletal, muscular and jiggle systems that underlay the skin to animate the goslings in exactly the same way real ones do.  With all these elements underneath the skin and feathers, we tested everything quite early on to see how they all interacted together, ensuring their movement was as convincingly real as possible.’

As well as the underlying structures, the exterior layers were just as detailed. As Hirani explains, ‘One of the biggest difficulties in creating the goslings was achieving realistic looking feathers. Goslings are covered in soft down that give them their fluffy appearance. Colour variation and randomisation was built into the fur system in order to make it look natural. As we were creating a gaggle of 5 goslings, the look and appearance of the feathers was altered for each one to differentiate them. Some shots required extra simulation on the feathers for collisions, like tickling, which meant building a 3D geometry for the object it interacted with, e.g. a hand.’

Finish Executive Producer Fi Kilroe comments, ‘ We are incredibly proud of this project, pulling off photoreal goslings that have managed to convince the most experienced of vfx artists. Working with the team from VCCP & Academy was a really enjoyable collaborative experience and made the whole project even more satisfying to see on screen at each release.’

‘Online Network’ is the fourth commercial in the O2 ‘More For You’ series by VCCP, having Finish completing the post production.