By day, Extra Cake is a vibrant creative agency in Dubai, by night they’re the heroes of the region’s comic book culture 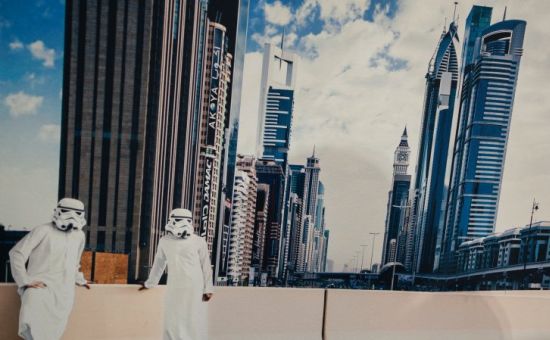 Look closely around Extra Cake’s offices and you might find clues to the Dubai-based creative shop’s true identity. Space Invaders stickers all over the walls. Shelves filled with action figures. Perhaps even, if you’re lucky, you might catch a glimpse of an original issue of She Hulk #1. Yes, these guys and girls are a talented bunch working on PR, advertising and events – but they’re also a bunch of huge geeks. So geeky, in fact, that in 2012 they decided to use their skills to create the one nerdy hub that the Middle East was sorely missing: a comic convention. And so the Middle East Film and Comic Convention was born, each year growing stronger as artists, professionals and fans flock from all over the region. Curiously though, while the project started as a way for them to let their inner fan geek out, the experience and connections they’ve made has impacted on their professional lives and opened many opportunities. What’s more, they’re riding the rising wave of pop culture-friendly advertising and marketing that’s sweeping through the region.

Laura Swinton caught up with Arafaat Ali Khan, PR Director at Extra Cake and one of the team that founded MEFCC, who was speaking this week at Dubai Lynx with Ben Caddy (MD and owner of Extra Cake and CEO of MEFCC) and artist Mo Abedin.

LBB> So why did you decide to create a comic convention for the Middle East?

AAK> Because we’re nuts and we’re geeks! I am a comic collector, I collect action figures. Our CEO collects figures and pop art and is really into Star Wars. There was always that conversation about ‘why can’t Comic Con come to the Middle East?’ and then something clicked and we said,’ Hold on, why don’t WE bring it here? What are we waiting for? We are capable and we are passionate.

From the business point of view it’s an interesting story. We had gone to an event in 2010 or 2011 and there were these two Emirati girls in a corner sketching. We went up to them and saw that they had some comics printed out. We asked to take a look and we saw that, wow, these were international level comics. We asked them where they were available and they said, ‘oh we used our dad’s printer to print a few copies out for friends and family’. But it was the sort of quality that could be sold in the States, anywhere. And that’s when it clicked that we have the talent here. We had to really put our money where are mouths were.

No one had really done this before. Four years ago when we went to companies to ask them to sponsor us they said ‘what? A Comic Con? Are you out of your minds?’. We had to prove to them that it was viable and we said we’re going to do it with or without support and we’re going to make it work. I believe we were right. We’ve seen so much talent develop where they had no platform before; it’s lovely to see these regional artists come out and be exposed to tens of thousands of people.

LBB> And does the comic or graphic art from the region have its own particular flavour or style or is much of it that mainstream superhero style?

AAK> This is a story I often tell people: what a lot of people don’t realise is that in the late ‘70s and early ‘80s on terrestrial television we received a lot of Japanese anime. At that time there was no Internet and global communications weren’t that great but when we watched those Japanese cartoons dubbed into Arabic, we adopted that as our own. I was four years old. You see a lot of the manga style emulated by artists because it’s so close to our hearts and we grew up with it. But now over the last couple of years we’ve seen the artists come into their own, they’re adapting and creating their own styles. Sometimes you might catch a glimpse of something that looks a bit anime but it’s something else entirely. 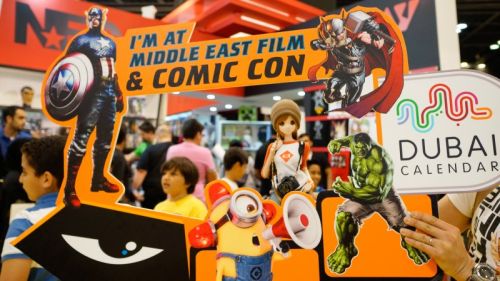 LBB> And what kind of people come to the event? Is there an identifiable Middle Eastern geek culture or is it a bit more transcendent?

AAK> That is the beauty that we’ve noticed at Comic Con. Sometimes there might be some kinds of events that attract one particular kind of person, whether that’s age or, not necessarily ethnicity but… mindset. Comic Con, what we’ve noticed, that boundary really doesn’t exist. You have Emiratis, you have Arabs who have flown down from Saudi and Qatar and Kuwait, you will have European ex-pats, you will have young children, teenagers or whole families, and you also have the older generations who want to come and meet their childhood hero William Shatner, for example. It’s beautiful.

You know the traditional Emirati dress, the abaya? That doesn’t stop them from being creative. If anything it comes out more so. For example, as a Muslim Emirati girl, I have to wear this but I can have some fun with it. We’ve seen things as simple as the abaya being worn with a Darth Vader mask, which looks great. Another thing was a girl in an abaya and she’d added Jedi robes and was carrying a light sabre. It looked incredible. People think that there’s a lot of restriction on creativity but no way, I think it brings out people’s ingenuity more.

I don’t know if there’s something that really defines the creativity or artists here because from what I have seen with artists from this part of the world is – and I don’t mean this to be a cliché – but they’re all so unique.

LBB> And how has your MEFCC journey influenced the way you work or the sort of work you’re doing in your day job at Extra Cake?

AAK> It’s phenomenal. These people are inspirational to us as well. Some of the artists who we’ve met over the years very often pop us an email saying, ‘hey I saw this and thought you guys would like it’. That can be ideas for Comic Con or it can be using pop culture in advertising and communications, which was part of our talk at Lynx.

It’s taking the business to different levels, which is very exciting. It’s beyond the traditional, if you will. There might be an animation project that comes up and we might know someone who went to Comic Con who is looking for a certain kind of project. We have been exposed to these industry professionals and it has inspired us to do more. For example, off the back of all of this we’ve decided to launch an entertainment production division, which will be launched at Comic Con. We’ve already got projects on the go and two of them are a fusion of a local IP under a creator who has come to us and we have brought in international talent to work on that. It’s new ground for us, obviously, and it’s opening doors for a lot of new and amazing things. Honestly, I want to go back to my 12-year-old self and say ‘Dude, keep reading those comics because it’s all going to work out’.

In University, 15 or so years ago, one of my projects was opening up a comic book shop. I always wanted to do something in that arena. And I think I can speak for a lot of the team who founded the MEFCC that they have too and we’ve been able to merge our careers with something so exciting, to do something for the fans – because we’re the fans.

LBB> And are brands and clients more open to borrowing from pop culture or geek culture now compared with when you started out on MEFCC?

AAK> It’s a big question. Over the last few years – and I’m not saying that this is because of Middle East Film and Comic Con, but we’ve played our part – we have seen more and more pop culture entering mainstream communications. There’s a local artist here who does digital design stuff and has been known in this part of the world for a long time and we’ve noticed him doing more and more stuff for different brands. As an example, one of the car magazines down here did their ‘Car of the Year’ event and they themed it as ‘hero cars’. They got this artist in to draw over the cars and create a superhero for each car that won. We had not seen anything like that before. There’s an outdoor advertising company and we’re working with them as well and their ads to promote themselves use the billboards as superhero speech bubbles. It’s definitely becoming more mainstream in the Middle East and elsewhere.

It means marketers are understanding their target audience a bit better. I would say over here, five or six years ago, going to some of these big brands you would literally have to explain to them what pop culture is and why it’s important to them… but now you go in and they get it.