Awards and Events 217 Add to collection 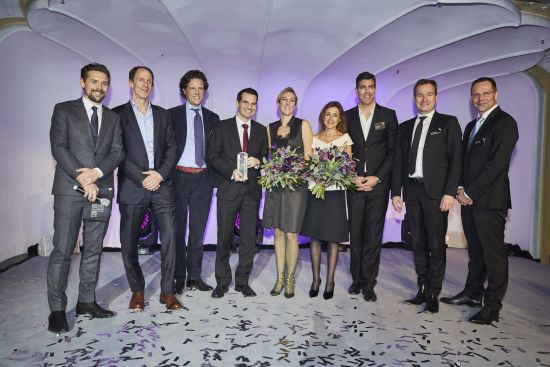 Since its inauguration in 2004, the annual Best Brands event has become an influential industry fixture, and the 16th edition of the awards gala recognised Germany's best brands in Munich on 20th February. Best Brands is the only marketing award to measure the strength of a brand on the basis of two criteria based on extensive representative GfK studies: actual economic market success and the attractiveness of the brand in the perception of consumers.

The evening gala at the Hotel Bayerischer Hof in Munich was attended by more than 700 invited guests from the business, trade and media industries, as well as selected VIPs, who gathered to celebrate the award winners in the categories; 'Best German Corporate Brand International'; 'Best Product Brand'; 'Best Growth Brand'; and this year's special category 'Best Digital Life Brand'.

The growing success of Best Brands over the years since it was established is the result of professional cooperation between each of its partners: Serviceplan Group, GfK, ProSiebenSat.1 Media SE, WirtschaftsWoche, Markenverband, DIE ZEIT and RMS. The coveted marketing prize is now also awarded annually in China, Italy, Belgium, and France. 2019 will also see the awards presented for the first time in Russia.

More than 14,000 consumers take part in the various Best Brands studies and, form the empirical basis of the study together with 30,000 households of GfK Consumer Panels, and 27,000 stores of GfK Retail & Technology. The consumers annually select the winners from more than 300 potential Best Brands candidates from around 40 sectors.

In the category 'Best German Corporate Brand International', Adidas was ranked number 1 for the first time. The sportswear brand has been represented in the top 10 ranking of the category for years, with steadily increasing success. Behind Adidas, the automobile brands BMW and Porsche take second and third place. Since 2012, the 'Best Corporate Brand' has been awarded annually in a changing international and European economic context. This time German companies were evaluated in the economic regions of the USA, China, Brazil and France in addition to their home country.

This year's 'Best Product Brand' is the toy manufacturer Lego – for the third time after 2010 and 2011. Boschfollows in second place, as last year, and Samsung in third place.

The 'Best Growth Brand' award went to the aperitif brand Lillet. This category shows the strongest change in market share in terms of value – especially in conjunction with the change in the attractiveness of the respective brand compared with the previous year. The winner, Lillet, was followed by kitchenware manufacturer Tefal and sporting goods manufacturer Under Armour.

In this year's special category 'Best Digital Life Brand', brands were measured in terms of how they make digitisation usable for consumers. The evaluation is based on various GfK studies about digitisation. Amazontook first place in the 'Best Digital Life Brand' category, followed by Google and Apple. As German brands in the top 10, Bosch was ranked 6th, Siemens 8th and Fritzbox 10th.