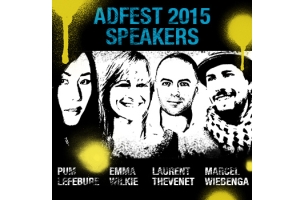 ADFEST is pleased to unveil the first of its first Speaker Sessions for 2015 in a program that includes some of the world’s most visionary creative leaders.

ADFEST will host 20 Speaker Sessions over the course of three days from 19th – 21st March at the Royal Cliff Hotels Group in Pattaya, Thailand. This year’s sessions include:

Thai designer extraordinaire Pum Lefebure will dissect and showcase examples of how she integrates a Thai sensibility with American design, connecting the East and the West. Her session will show people it’s possible to integrate your passion and creativity into everyday life to be a more motivating leader.

Lefebure is Co-Founder and Chief Creative Officer of Design Army in Washington, D.C., and Jury President of Design Lotus and Print Craft Lotus at ADFEST 2015.

“I was born and raised in Thailand, and my family still lives in Bangkok. Temples, Golden Chedi, Thai dance, textile design — they all contribute to my design aesthetic.  My work tends to be exotic and imaginative, and I think being Thai has everything to do with that. It’s just in my blood, and I’m looking forward to sharing some of my inspirations at ADFEST this year,” says Lefebure.

Laurent Thevenet, Technology Director at Proximity Singapore, is joining the line-up of speakers at ADFEST 2015 to talk about the emergence of inspiring new creative models involving more disciplines beyond just art and copy; and evolved creative teams who break the rules, think differently, and are ultra-reactive.

“‘I am delighted to be speaking at ADFEST. We are in a period of incredible change. Technology is changing social behaviours and media consumption. Our industry needs to adapt and quickly. My talk will be about what it takes to innovate from the point of view of a technologist leading a team of innovators and doers at Proximity Singapore. A group of people who react to business problems by making things happen, building a next generation agency”, says Thevenet.

Thevenet has been leading technology at Proximity Singapore since December 2012 where he works across clients including VISA, Exxon, Fonterra, Mercedes and Guinness.

Emma Wilkie is returning to ADFEST for the world premiere of The Gunn Report 2014.

“Expect to see all the league tables, all the winners, lavishly illustrated by the world’s best ads that defined 2014,” says Wilkie, Managing Director of The Gunn Report in London.

Wilkie has been Donald Gunn’s collaborator and co-presenter of The Gunn Report since January 2003. She started her career in the Creative Department of DDB Needham Worldwide (now Adam&EveDDB London), later creating The Gunn Report company with Donald Gunn in 2007.  The Gunn Report online research database and library www.gunnreport.com launched in 2011.

Uncanny Valley’s Justin Shave and Charlton Hill will examine the evolution of human response to audio, and the psychology behind music use as a brand tool.

“Whether we’re producing artist-driven records, creating a sting for a major brand or working to integrate audio into new technologies, our experiences in delivering music and sound to clients all over the world have given us a unique perspective on the anatomy of sound,” say the duo.

Shave is one of Australia’s preeminent music producers and musical directors. With a string of gold and platinum record hits to his name, he has helped artists and brands around the world find their sound.

Hill is executive producer and music supervisor of award-winning music and sound company Uncanny Valley, which he co-founded with Shave in 2010.

Before joining Sizzer Amsterdam in 2008, Marcel Wiebenga was a drummer who conquered a modest place in music history in the early 2000s when he toured extensively with Dutch-American extreme hardcore punk band Das Oath.

His presentation at ADFEST will recall those days, explain punk’s attitude and ethics, and more importantly, give insights on how they relate to his current work as a music supervisor and the advertising world in general.

“Most of what I know is by being in a band, sitting in a van, travelling the world… and you know what: I’m doing quite alright and to be honest, I’m having as much fun in this crazy Ad world!” says Wiebenga, who is Partner, Business Development Director and Music Supervisor at Sizzer Amsterdam.

Wiebenga has worked on countless award-winning advertising films for Audi, Diesel, Remax, Schweppes, Citroen and Assassin’s Creed, amongst others.

ADFEST will continue to unveil this year’s program in the coming weeks. Book your Delegate Passes to ADFEST via www.ADFEST.com