As the festival kicks of this week in Pattaya, Thailand 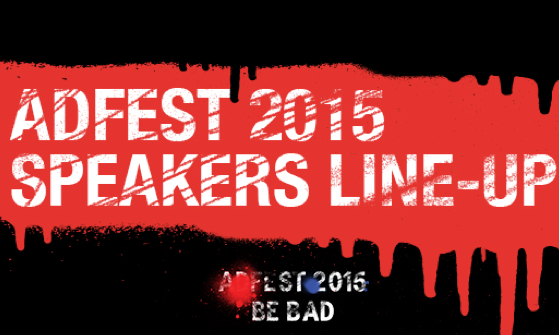 This year’s program is now available at the Adfest website

HOW TO MAKE A BRAND BAD ASS
R/GA, New York
(Thursday 19th March, 10:45am)
D&AD in London is bringing in R/GA’s global chief creative officer, Nick Law, to present a Speaker Session that will kick off ADFEST 2015. Law guides the strategic and creative vision of one of the world’s most awarded agencies and has twice been named in the Creativity 50, a list of the world’s most influential creative people, and is recognised as an industry thought leader.

THE GUNN REPORT 2014
The Gunn Report, London
(Thursday 19th March, 11:30am)
Emma Wilkie is returning to ADFEST for the world premiere of The Gunn Report 2014. Expect to see all the league tables, all the winners, lavishly illustrated by the world’s best ads that defined 2014.

CIRCLE OF TRUST
(Thursday 19th March, 2:30pm)
Brand strategist Sidharth Loyal will call for people to “Be brave” in widening their circle of trust; giving people credit; and sharing ideas. Loyal believes the majority of client/agency relationships have a big trust deficit.

THE GOOD, THE BAD, AND THE PUNK ROCKER TURNED MUSIC SUPERVISOR
Sizzer, Amsterdam
(Thursday 19th March, 4:45pm)
Before joining Sizzer Amsterdam in 2008, Marcel Wiebenga was a drummer with Dutch-American extreme hardcore punk band Das Oath. His presentation at ADFEST will recall those days, explain punk’s attitude and ethics, and more importantly, give insights on how they relate to his current work as a music supervisor and the advertising world in general.

ROI OF THE BAD: DO SHOCKING ADS REALLY WORK?
Best of Global Digital Marketing, Tallinn
(Thursday 19th March, 6pm)
Shocking, different, bad. Award judges love such ads and value their creativity. But do such ads really work and make the advertiser happy? To shed light on this contentious topic, Hando Sinisalu – CEO of Best Marketing International in Tallinn, Estonia – will offer lessons on how to make shocking ads work.

BE BAD! A TECHNOLOGIST’S GUIDE TO BREAKING CREATIVE RULES
Proximity Singapore, Singapore
(Thursday 19th March, 6:45pm)
Laurent Thevenet, technology director at Proximity Singapore, is joining the line-up of speakers at ADFEST 2015 to talk about the emergence of inspiring new creative models involving more disciplines beyond just art and copy; and evolved creative teams who break the rules, think differently, and are ultra-reactive.

MAKING IT IN HOLLYWOOD: THE HARD WAY AS AN INDEPENDENT PRODUCER, ACTOR, CREATOR & DIRECTOR
Paul J. Alessi
(Friday 20th March, 10:45am)
Paul J. Alessi, a New York native, was working as a model before moving to Los Angeles where he decided to pursue a career as an actor full-time. Since then, he has begun producing and directing, and now has several features in development. At ADFEST, he will shed light on how he made it in Hollywood.

YOU ARE A HERO. NOT A TARGET. THE NEW ERA OF STORYTELLING
Hakuhodo Kettle & TBWA\HAKUHODO, Tokyo
(Friday 20th March, 2:30pm)
Kazuaki Hashida and Takahiro Hosoda from Hakuhodo Group will explain, with plenty of real-world examples, how Hakuhodo approaches and creates ads that turn consumers into heroes.

STORYTELLING IS THE NEW BLACK
Moth Projects, Sydney
(Friday 20th March, 3:15pm)
Jonathan Samway, partner and executive producer at Moth Projects in Australia, believes the advertising industry has moved further and further away from its most important job: to tell stories that engage people.

MUSIC & SOUND: THE ANATOMY OF AN EARWORM’
Uncanny Valley, Sydney
(Friday 20th March, 4:45pm)
Uncanny Valley’s Justin Shave and Charlton Hill will examine the evolution of human response to audio, and the psychology behind music use as a brand tool.

SHORT FILMS BY THE FABULOUS FOUR
(Saturday 21st March, 11:30am)
Four up-and-coming directors are preparing to debut their short films to a live audience. All four films will be based on each director’s interpretation of the ADFEST 2015 theme, “Be Bad”.

JURY PRESIDENTS CROSSFIRE I & II
(Saturday 21st March, 2:30pm and 3:15pm)
This year’s Jury Presidents will take the stage to answer probing questions about this year’s Lotus contenders. The first Crossfire session will be moderated by Brett Mitchell, director of Pollen in Sydney, and the second will be moderated by Normandy Madden of Thoughtful Media Group.

DESIGN YOUR LIFE SO YOU CAN KICK ASS 365
Design Army, Washington DC
(Saturday 21st March, 4pm)
Thai designer extraordinaire Pum Lefebure will dissect and showcase examples of how she integrates a Thai sensibility with American design, connecting the East and the West.

UNDENIABLE
AKQA, New York
(Saturday 21st March, 4:45pm)
AKQA’s Chief Creative Officer Rei Inamoto is famous for his ability to predict the future. He will share his forecasts for the next five years.