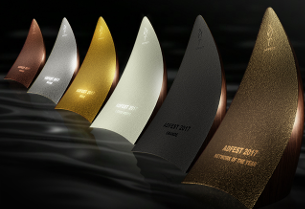 Jimmy Lam, President of ADFEST, says: “To celebrate our 20th anniversary, ADFEST invited designers from around the world to create a brand new Lotus trophy. From over 40 intriguing design submissions, one concept stood out for its simplicity, humility and symbolism – and it was conceived by a team of talented creatives at DDB Philippines.”

Vinit Suraphongchai, Chairman of ADFEST, says: “We’d like to thank everyone who entered our trophy design competition. The committee was overwhelmed by the quality and originality of entries, and the winning trophy will play an important role in the festival’s future.  The trophy’s symbolism is ideal for ADFEST. Not only is the lotus our logo identity, but the lotus flower is so deeply rooted in this region’s culture.”

Some of the region’s most respected creative executives helped to choose the winning design.

David Park, Founder of Maud in Sydney, says: “Like the D&AD Pencil, the petal shape has a wonderfully singular and inclusive spirit that captures the importance of a Lotus win at all levels. It’s extremely unique in the way it tells our story, and I love the collectable desire it invokes to complete the entire flower. The other thing I love about this design is its humility.”

Yoshihiro Yagi, Creative Director at Dentsu Inc. in Tokyo, says: “This is a simple and functional idea that represents the blooming creativity of Asia”.

Hozefa Alibhai, Managing Director of 200 not out FILMS in Mumbai, gave the design full points for its “unique and slick design – the entire set of trophies together look stunning.”

Conceptually, Bantilan, Ngo and Garcia took inspiration from the lotus flower, which begins life as a humble seed but blossoms into something very special. Eight trophies form a full circle of petals, and the circles can be layered to create a complete flower.

“The lotus flower represents tenacity and resilience. Its story is the story of a creative person and every idea that starts out rough, but ends beautifully. Each idea is like a single petal – beautiful on its own, but looks even better when put together with others. It speaks well of our motivation to keep on creating beautiful work,” say the trio.

“Redesigning the iconic ADFEST trophy was a formidable task because the trophy will represent ADFEST for a long time. To be able to contribute to ADFEST means a lot, especially when the new trophy is a significant feature of the 20th year of ADFEST. It humbles us, and the experience of designing the ADFEST trophy is a reminder that all the hard work will pay off once you put your heart into it.”

Bantilan, Ngo and Garcia have also designed a new Lotus certificate, as well as a short film introducing the new Lotus trophy. Watch it here: https://youtu.be/keTuUpCx-9w