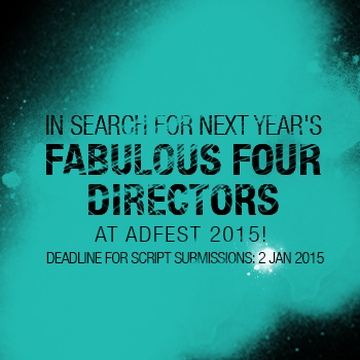 ADFEST is once again looking to unearth the region’s top emerging directors and is inviting script submissions from directors and assistant directors in Asia and the Pacific (including Australia, New Zealand), and the Middle East.

ADFEST’s ‘Fabulous Four’ program supports directors who are cutting their teeth in the industry by putting their work in front of some of the world’s most influential creative professionals and producers.

“Fabulous Four helps directors launch their careers and build their reels by giving them the chance to create a short film, and then screen this film live on stage at ADFEST 2015,” says Jimmy Lam, President of ADFEST. “It is a once in a lifetime opportunity for directors and assistant directors – the kind of opportunity that could change your career forever.”

To enter, simply submit a 5-minute short film script inspired by the theme ‘BE BAD’, which is the theme of ADFEST 2015. The film must be one of the first seven works you have ever directed.

Scripts should be submitted to nat@ADFEST.com before 2nd January 2015. After this, they will be judged by next year’s Film Craft & New Director jury panel. The four directors who receive the highest scores will become the 2015 Fabulous Four New Directors, and their films will premiere at ADFEST 2015 on 19th – 21st March at the Royal Cliff Hotels Group in Pattaya, Thailand. Return economy airfares, accommodation, ground transportation and full delegate passes will be fully covered by ADFEST.