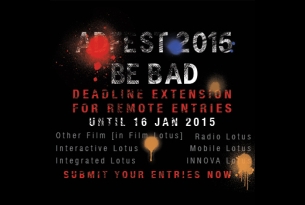 ADFEST has extended the entry deadline for Lotus categories that will be judged “remotely” for the ADFEST 2015 Lotus Awards until Friday 16th January.

Entries to the Remote Judging Categories (which include Other Film in Film Lotus, Radio Lotus, Interactive Lotus, Mobile Lotus, Integrated Lotus, and INNOVA Lotus) were originally scheduled to close this Friday 9th January 2015.

“We have received many requests from agencies, production companies and creative studios across the Asia Pacific and Middle East asking for more time to finalize their entries, so we are happy to confirm we have pushed back the Remote Judging deadline to 16th January,” says Kem Suraphonchai, ADFEST Festival Director.

The entry deadline for all other Lotus categories is also Friday 16th January.