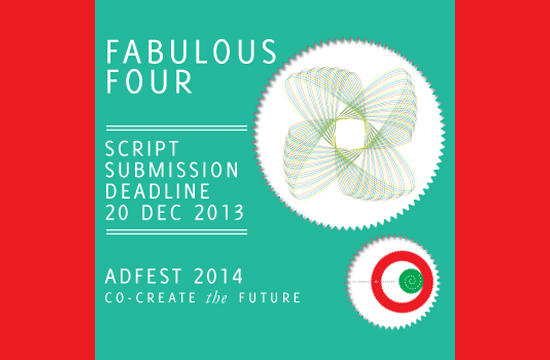 The search for the region’s Fabulous Four directors is on again as ADFEST invites Directors and Assistant Directors in Asia and the Pacific (including Australia, New Zealand, and Middle East) to submit short film scripts inspired by the theme ‘Co-Create the Future’, which is the theme of ADFEST 2014.

ADFEST’s ‘Fabulous Four’ program supports aspiring Directors and Assistant Directors who are cutting their teeth in the industry by putting their work in front of some of the world’s most influential creative executives.

Eligible entrants are now invited to submit their 5-minute short film scripts and Script Submission Form by Friday 20th December 2013 to Nat@ADFEST.com.  For more details on eligibility and to download the Script Submission Form, visit: http://www.adfest.com/Entries_fabulous.php
After the Film Craft & New Director jury panel has read all the scripts submitted, they will vote for their favorite. The four directors who receive the highest scores will become the 2014 Fabulous Four New Directors.

These directors will have one month to produce their scripts, which must be one of the first 7 works they have ever directed. Their films will premiere at ADFEST 2014 on 6th – 8th March 2014 at the Royal Cliff Hotels Group in Pattaya, Thailand.

Not only will the Fabulous Four win the chance to present their works on stage, their return economy airfares, accommodation, ground transportation and full delegate passes will be fully covered by ADFEST.

“Fabulous Four is one of the only programs in the world that helps directors launch their careers and build their reels,” says Jimmy Lam, President of ADFEST. “It is incredibly difficult for emerging directors to get their work seen by busy creative directors. Fabulous Four is a shortcut for these directors to demonstrate their talents and do some serious networking.”

Vinit Suraphongchai, Chairman of the ADFEST Working Committee, says: “Fabulous Four is one of ADFEST’s most important pillars. It supports our philosophy of nurturing creative talent, and is always hugely popular with delegates.”