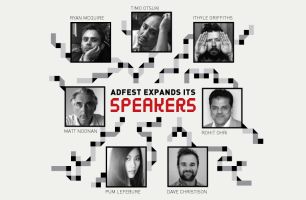 ADFEST 2017 continues to unveil more inspirational line-up of speakers, workshops and events, which reflect its theme ‘20 Years of Diversity’. ADFEST will be divided in two halves: Craft@ADFEST (22nd to 23rd March) will explore trends influencing production, post and digital companies; while Creative@ADFEST (24th to 25th March) is tailored for agency and marketing professionals.

The latest sessions to be announced are:

Cut To Tomorrow: The Crucial Role of Editors in Crafting Campaigns

The Magic of High Touch

Griffiths will share his ideas on developing a personal style and refining techniques; how to come up with concepts that inspire human connection; and the importance of creative experimentation. As a director with a passion for stop motion, he will also share a technique for communicating ideas in a magical way.

2016 saw the release of Curious-produced feature film, "The Hunt for the Wilder People". It premiered at Sundance Film Festival and went on to set a new box office record as a top 10 all-time film in New Zealand. Noonan will share the process of developing the film, also delving into the art of creating successful contemporary branded entertainment.

FCB’s Never Finished Story is a theory that suggests brands should by no way be static and unchanging. It implies an innate ability to change, evolve and grow with the times – a fundamental shift from ‘building’ a brand story that is large, monolithic and static to ‘dissolving’ a brand’s story so that it is fluid enough to be told in different contexts, in different ways. Ohri will explore FCB’s approach to telling stories that never end.

Master the Art of Seduction

Do you believe in love at first sight? Smart designers do. After all, the first visual is the ultimate seducer – it flirts and mesmerizes. It triggers feelings that create not just a fleeting encounter but a full-fledged experience. For brands, that means killing old models and designing new emotional journeys. It’s less about commercials and more about brand experience. Don’t bore your audience – beguile them. Lefebure will reveal design secrets that give branding more passion and sales more punch.

The Woolshed conceives, creates and strategically seeds viral video campaigns, repeatedly amassing worldwide news coverage and accumulating over 310 million online views (and counting), all without any paid media, promotion or distribution. Christison will share some of the creative rules and seeding strategies The Woolshed Company implements in order to create 'snackable', highly sharable content that is capable of reaching worldwide mass audiences.