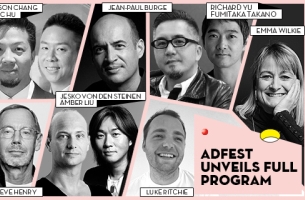 ADFEST has announced the final sessions that will complete a spectacular four-day line-up of speakers, workshops, networking forums and parties next week at ADFEST 2016, which kicks off on Wednesday 16th March.

Delegate Passes to next week’s festival can be purchased here.

The last sessions to be announced are:

Jason Chang, Creative Director at Cheil Greater China in Shanghai and Eric Hu, Executive Producer & Founder at Republic Studios in Shanghai, will present a session called: ‘Mary had a Little Lan: Making Technology Playfully Elementary’, which takes place on the first day of the festival at 11:30am.

Their session will investigate the necessity of human context in a tech-heavy world, and how child-like cues enrich our engagement with technology.

Chang’s creative career began in Shanghai at Bravo Asia where he worked with clients such as Porsche, Moet Hennessy, and New Balance. After Bravo was acquired by Cheil, he took the creative helm of branding and design, where his eye for product design blends with his branding experience to create new product brands like Kamiliant for Samsonite.

Jean-Paul Burge, Chairman and CEO of BBDO Asia, will kick off Day 2 of ADFEST 2016 with a session exploring how to foster and develop a creative culture within agencies. What does it take to foster the next generation of multi-skilled talent? How can creative culture be maintained alongside organisational growth?

Burge was appointed Chairman and CEO of BBDO Asia in March 2015. He began his career with JWT in 1998 and joined BBDO in 2004. Over the past seventeen years he has worked in London, Bangkok, Amsterdam, Hong Kong and Singapore.

ADK’s Richard Yu and Fumitaka Takano will reveal ‘The Secret Ingredient’ when it comes to creating groundbreaking ideas for clients.

From designer to CCO over the past 22 years, Yu has led his agency to win Agency of the Year for seven consecutive years (2008-2014, Bates and ADK) in Greater China or Taiwan at several famous creative rankings.

Fumitaka Takano is Creative Director & Communication Architect at ADK in Tokyo. In 2014, he made up digital creative team ‘NOIMAN’ within ADK pursuing innovative approaches.

This presentation will begin with live immersive theater, taking teachings from PunchDrunk or Future Cinema to explore how to build an experience for one person, or 1,000.

Presented by Luke Ritchie, Executive Producer of Nexus Interactive Arts in London, the session will also borrow knowledge from games designers and filmmakers to explore what constitutes a "scene" in a 360 virtual environment, and how to get 'visitors' from A to B without them ever feeling guided.

“The intention for the talk is for clients and agencies to feel more confident while approaching less-linear based work, and realise open spaces, real or virtual, only imply freedom: we're still very much in control,” says Ritchie.

Emma Wilkie returns to ADFEST for the World Premiere presentation of The Gunn Report 2015. Don’t miss the most comprehensive showcase of 2015’s best, as well as The Gunn Report’s exclusive Asia Pacific ranking.

D&AD is bringing one of England’s top creative thinkers Steve Henry to ADFEST to present a session that will help advertising professionals move beyond creating ‘good’ work to creating ‘great’ work.

“I believe that 95% of advertising is a waste of money. It disappears- because it doesn’t dare to stand out enough. Doing outstanding work takes courage as well as creative talent. In this talk, I will explain why I believe really great work is so rare in our industry – and give insights into how to produce really great work,” says Henry, Founder of HHCL and Decoded, voted Campaign's Agency of the Decade in 2000.

Henry’s session will examine all aspects of the creative process, from client relationships, to research, to how your creative should be working.

In 2010, over 500 artists, designers, engineers, acrobats and dancers came together to create The House Of Dancing Water with Franco Dragone in Macau, China. It was the largest, most technical water-based theatrical show in the world.

Liu’s questions will address common problems facing the marketing communication industry today to discover if there’s anything advertising professionals can learn from the world of performing arts.