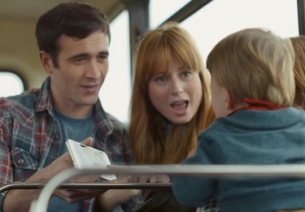 Adelphoi Music demonstrate the power of original composition after storming the charts with Be Good. Devised for Grey London, the track has found success on the recent Vodafone spot Happy Bus Journey.

The bespoke track, produced by Adelphoi Music’s Jonathan Watts and Justin Andree and written by Max Brodie and Tom Rosenthal, has propelled up the iTunes (#5 in UK Soundtrack), Shazam (#45 in UK and #3 in UK Ad) and Spotify (#4 in UK Viral) charts.

Delivered to Adelphoi as an open brief, the production duo explored the option of syncing an existing track or compilation before settling on the bespoke path. The brief was sent across as a pre-score with just a script and the Director’s treatment, and both Grey and Vodafone had a preference for the lyrics to be centred upon saving the day.

Initially tasked with creating a 60 second track, Adelphoi drafted in Max Brodie and Tom Rosenthal to help craft the lyrics and instrumentation, with the track evolving into a full-length, commercial release.

Jonathan Watts comments: “The spot is about a guy being an everyday hero who turns a bad situation around. So we set about creating an upbeat soundtrack that supports the film’s beautiful photography, and helps bring the performances to life.

“This was a highly collaborative project. Having a relationship is important and I’ve worked with Max for a number of years so I know how he works. We aimed to capture something that was humble, light-hearted and British, but still appeal to a twentysomething audience.”

Directed by Bare Films’ Steve Green, the spot tackles the one life’s most annoying situations; a wailing baby on public transport. Coming to the rescue are a couple who, aided by Vodafone’s superfast 4G network, are able to capture the bawling youngster’s attention to avoid the journey from hell. The track complements the stunning cinematography, which captures the heart of the beautiful British countryside, putting an upbeat spin on a potentially agonising situation.

“We’ve all experienced that situation and with the brief being open stylistically, we wanted to hook into the spot’s light-hearted humour without stepping into slap-stick territory,” says Jonathan. “It was important for the track to have a degree of emotion - to slightly pull on the heartstrings - without being too overpowering.”

Amassing over 740,000 views on YouTube since launching in August, the project has proved to be a huge hit and Jonathan believes the bespoke element is a big factor in the track’s success: “It was a gut feeling on my behalf to go down a male vocal acoustic folk route and Grey put a lot of trust in us, allowing us total creative freedom. Convincing brands to go for something completely unknown, that nobody has ever heard before, is tough. We looked at a way of going one step further, towards a commercially viable sound the brand can own. The final track has an authentic sound; the vibe and instrumentation sound natural and organic, truly capturing the essence of the spot.”

Be Good, by Max Brodie (feat. Tom Rosenthal), is available to buy now on iTunes and stream on Spotify.