Entrants created 30-second films on behalf of charities which aimed to spread their messages in a vibrant and unique way. 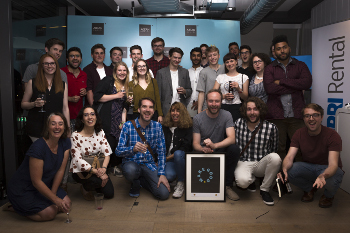 ADCAN today announces the winners of the 2016 ADCAN Awards – the third instalment of an annual competition, which champions unsigned creative talent by giving them access to industry leaders, and provides charities and social enterprises with original content to help promote their cause.

Entrants were tasked to select a brief from one of four charities and social enterprises, and create a 30 second film, which helps to spread their messages in a unique and vibrant way. This year’s diverse slate of causes include; The GirlHood, a social enterprise that supports and encourages young women to succeed in the creative industries; Streetbank, a charity that fosters sharing to create better communities; Nordoff Robbins, the specialist music therapy charity dedicated to transforming the lives of vulnerable children and adults across the UK, and finally CALM, a campaign against living miserably, supported by Topman and UK rapper Professor Green, who is one of their many ambassadors. Each charity and social enterprise will be able to use the winning films to further promote awareness for their causes, providing them with access to creative resources that might otherwise be unattainable due to financial constraints.

Jane Powell, CEO, CALM, says: “The films produced for the campaign against living miserably, CALM, were brilliant. Suicide is the single biggest killer of men aged under 45, and it is mainly men who take their lives, 76% of all suicides in 2014 in the UK were men. If we are to tackle this, then we have to change how masculinity is seen, how men feel they can be or should be. The films submitted for CALM did just that. Fantastic quality, great scripts, wonderful editing; they all hit the topic straight on. Feminism has won women the right to define just how we can be. It’s time for men now to do the same, and films such as those produced for CALM will help do just that. They can change the world we live in. They will save lives. Thank you to all at ADCAN for making this happen.”

Jo Carter, Director of Marketing, Fundraising and Communications at Nordoff Robbins adds: “It is a real privilege to be part of this year’s ADCAN Awards. Films are such a powerful medium through which to spread a message, and certainly for us a charity they are crucial in helping us to communicate the real benefit of our work to so many people. This is a truly fantastic initiative and we know that the films produced by all these talented people will really help to promote our work, and that of the other organisations who are involved. We have seen some real and raw talent shine through this project and it has been a wonderful experience to see how people have been able to so artistically convey the true impact of our work – to change lives through music therapy.”

Chosen by industry leading production companies and judges Rattling Stick, Partizan and Nexus, the filmmakers were awarded at a special event hosted by The Mill last night.

The winners are as follows:

For the first time, ADCAN also introduced a People’s Choice Award, sponsored by ARRI Rental. Chosen live by guests in attendance at the awards ceremony, the award was given to Klaas Diersmann for his film (T)HUGS, for CALM. ADCAN also named Klaas Diersmann as the overall Grand Prix Award winner. All films can be found here.

Deborah Casswell, Founding Partner, ADCAN said: “Each year the amount of films entered in to the ADCAN Awardscontinues to increase. So does the quality and diversity of the films. With this in mind, we thought this year we should create an opportunity to honour the opinion of our guests, who continue to support and attend the awards ceremony. As we go from strength to strength, it’s important to shine a light on all of those that support ADCAN and provide further recognition to our fabulous filmmakers where possible.”

Klaas Diersmann, Grand Prix Winner of the 2016 ADCAN AWARDS, also adds “As an independent filmmaker and animator, I'm always looking for new ways to explore filmmaking. I was really intrigued by the ADCAN concept of giving new filmmakers a platform to communicate messages and tell stories for a good cause. I was particularly drawn to the CALM brief because of the big challenge it posed; to change the perspective of masculinity. I'm keen to expand my cinematic storytelling into all areas of advertising and film, and I'm currently developing a few short and feature length projects.”

As part of the competition, all of the winners and shortlisted contestants have been given the opportunity to attend two days of exclusive industry access workshops with ADCAN partners Partizan, Rattling Stick and Nexus, and other industry leaders such as Work, Wave, ARRI Rental and The Mill. Shortlisted contestants also took part in a speed mentoring session last night, with a selection of the industry’s finest production companies, including RSA, Knucklehead and Rogue Films.Chaka Sobhani, CCO of leading advertising agency Leo Burnett, also attended the ceremony and delivered a speech on creativity and the industry.

Founded by creative and production veterans, Brydon Gerus, Dan Heighes and Deborah Casswell, ADCAN is a collective of top film and advertising industry execs and companies, all volunteering their time and expertise to #makegood. It was created to help more emerging talent get their foot in the door and mobilise the film and advertising industry to make a real difference.

Previous winners of the ADCAN Awards have gone on to make everything from music videos to short films, some have even secured full time employment with leading production companies Rattling Stick and Partizan. All shortlisted filmmakers will become part of the ADCAN Alumni and will benefit from ADCAN’s ongoing support and advice, as they continue and progress in their careers.