ADCAN Announces Judging Partnership with March For Our Lives 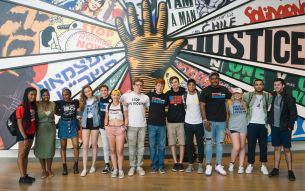 Los Angeles and London based non-profit creative organization ADCAN is pleased to announce a judging partnership with March For Our Lives for ADCAN’s fifth annual filmmaking competition this fall.

This year’s competition is focused on the theme of “Youth.” The charities receiving winning work this year, while varied in mission, all share a common thread: belief in the ability, value and strength of the world’s youth.

The team at ADCAN was so moved and inspired by the maturity, power and voice of the Parkland student activists leading the conversation on GUN SAFETY that they decided to make their first ever Open Brief dedicated to this topic. ADCAN has now officially partnered with the students behind the movement at March For Our Lives to help judge the entries coming in against the GUN SAFETY brief. The students will also have the opportunity to take part in the workshops and awards ceremony for the competition.

This is year five of ADCAN’s free-to-enter annual competition for emerging talent. It provides unsigned creatives access to industry leaders, charities with original content to promote their cause, and calls on the professional creative industry to use their powers for good.

The ADCAN competition is held once a year and calls unsigned filmmakers, animators and creative people across the globe to use creativity as a force for good in response to briefs developed for ADCAN’s partner charities. The new Open Brief is for ANYONE and can be responded to in ANY medium. The four film briefs are only for emerging talent. They require an original 30 or 60 second film inspired by briefs designed to promote each cause. All shortlisted work is given to the charities to use in perpetuity, and the winning and shortlisted creators are invited to attend career-enhancing workshops in London and Los Angeles led by ADCAN’s industry partners and judges. The film briefs this year are for: Ashoka, Springster, United We Dream, and Young Health Movement.