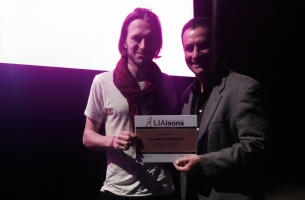 The winners of ADC Germany’s Talent of the Year and Junior of the Year awards have been awarded a trip to attend Creative LIAisons 2016.
Receiving this year’s Talent of the Year award was Leonard Rokita, Hochschule für Künste Bremen (University of the Arts Bremen), whilst Viktor Szukitsch, Scholz & Friends, picked up the Junior of the Year award. LIA’s Strategy Director, Wayne Youkhana, was at the awards on Saturday to present both winners with their certificates and to personally invite them to this year’s Creative LIAisons programme in Las Vegas.
Wayne comments: “On 23rd April, I had the honour of presenting the ADC Germany's Talent of the Year and Junior of the Year with tickets to LIA's Creative LIAisons programme onstage during the ADC Germany Festival in Hamburg. This is the third year in a row that LIA and the ADC Germany have partnered up to provide two young creatives this amazing and exclusive educational opportunity. LIA has a deep respect for the ADC Germany and all they do to nurture the next generation of creatives whose responsibility will be to move this industry forward."
Each year, London International Awards pays for young creatives and planners from around the world to fly out to Las Vegas to attend Creative LIAisons, a fully-funded mentoring programme that runs concurrently with LIA’s judging week. The young creatives are given an incredible opportunity to hear from the top brains in the business and to observe LIA’s judging process in action.
Creative LIAisons comes at absolutely no cost to the young creative or their employer, as the entire initiative – including travel, meals and hotel expenses – is covered by LIA. The creatives must be between the ages of 21 and 30 to qualify for attending Creative LIAisons.
Leonard comments: “To be invited to join LIA in Las Vegas was an even bigger surprise for me than being honoured as ADC Talent of the Year 2016. Though it’s always easier to get in touch with the local scene and award-world, I reflect on this invitation as a big chance to broaden my horizon and to get to know international and prestigious professionals.
“Globalisation is demanding exchange in every scene worldwide, mostly only happening via digital channels. Creative LIAisons is bringing us young creatives and the professionals together face-to-face and offers us the opportunity to understand how our neighbours think, feel, and create. Though I’ve already travelled the world, Creative LIAisons will mean a new way of a focused journey to me.”
Dörte Spengler-Ahrens, Chief Creative Officer of Jung von Matt and speaker at last year's Creative LIAisons, adds: "The creative LiAisons is the best thing that can happen to a young creative. It is like a ticket to the front row of creative excellence. Firstly because of the speeches held by the most known and respected creative leaders of the world and the chance to meet them in person. Secondly because they can literally join the jury and participate in the jury process, learn what great creative minds are thinking about the work and discuss with them later. Finally because it is great fun to meet other young people and to share not only thoughts but also drinks."
Michael Ullrich, Junior Art Director at Kolle Rebbe, is a former competition winner and attendee at the Creative LIAisons. On what he took away from the experience, Michael says, “I am always trying to find the honest way and follow that way. No fakes! That’s my opinion and Creative LIAisons made me stronger and supported that opinion.”
The LIA 2016 Entry System is now accepting entries. The initial Entry Deadline is 10th June. Judging will take place in Las Vegas from 6th October to 14th October. The shortlists will be announced as each judging session concludes, with Winners being announced 8th November. For more information on submissions and eligibility, please visit the LIA website.
view more - Awards and Events