The new campaign sees Virgin Atlantic team up with TripAdvisor 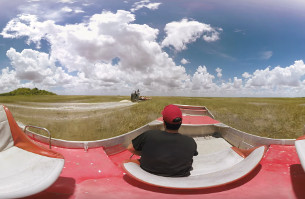 Using 360 degree immersive film with spatial sound, the online campaign brings to life TripAdvisor reviews from some of the UK’s most prolific reviewers. Set in San Francisco and Miami, ‘The Ultimate Review from The Ultimate Reviewer’ takes its audience on a tour of three of each city’s hotspots, set to a narration of TripAdvisor reviewers’ recommendations. Shot using a third person point-of-view, the tour goes from jet skiing along Miami beach to passing under the Golden Gate Bridge in San Francisco.

The campaign is the winner of the 2016 TripAdvisor Creative Challenge, which invited brands to showcase their creativity and talent through the interactive medium of online advertising display.Combining Virgin Atlantic’s brand attitude of 'Life doesn’t come to you, so go to it' with TripAdvisor’s unrivalled traveller insight, ‘The Ultimate Review from The Ultimate Reviewer’ is part of a drive in the airline’s digital and social activity aimed at those with an adventurous and impulsive spirit, following the successful ‘One Day’ campaign launched in May 2016.

Ben Peterson, Group Head of Display for UK & MEA at TripAdvisor, says; “The Virgin Atlantic campaign really stood out among the entries for the 2016 TripAdvisor Creative Challenge with its innovative use of 360 degree video that brought TripAdvisor reviews to life in a new and unique way.With travellers planning their trips on multiple devices and at all times of day, we’re excited that this campaign will enable Virgin Atlantic to inspire those travellers by aligning the brand with great content in our unique environment.”

Hamish Rickman, Vice President, Marketing at Virgin Atlantic, comments; “We were really excited to work with TripAdvisor to deliver this campaign, many elements of which are media firsts for their site. As a brand, we wanted to make the most of today’s fast moving technology to deliver a truly interactive and engaging experience both visually and aurally, putting people and their experiences at the heart of the idea. We also wanted to give consumers a flavour of what was possible beyond their Virgin Atlantic flight, by showcasing the fantastic culture and vibrancy that both destinations have to offer.”