adam&eveDDB Runs Through a Beautifully Mad World for Lloyds 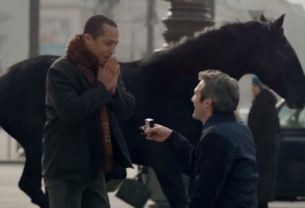 Lloyds Bank is launching a new brand campaign, its first since moving the account to adam&eveDDB in 2015. The new campaign introduces the strapline ‘For Your Next Step’ and shows how Lloyds Bank gives financial confidence to its customers as they approach their next steps in life.

The new campaign continues the use of the iconic black horse, following its return in last year’s 250 anniversary campaign, also created by adam&eveDDB.

At the heart of the campaign is a 60 second film, shot in super slow motion, where we see the black horse dramatically galloping through real life next step scenarios, such as the birth of a child, a marriage proposal, or a funeral.  At the end of the film each of the scenes then returns to real time as we see each step unfold.

The campaign launches on the 11th March and will run in TV, cinema, digital, print, outdoor and social media.

Mat Goff, Managing Director at adam&eveDDB, says: “Having taken a look back through history in the 250 campaign, we are now looking forward to showing how Lloyds Bank can help give their customers confidence to take their next step whether that’s a planned, unforseen, happy or a challenging one.”

Catherine Kehoe, Managing Director Group Brands and Marketing, Lloyds Bank said:   “The new campaign builds on the phenomenal success of the 250th anniversary campaign, showing how we’ll always be by our customers’ side, giving them the financial confidence to take their next step.   We’ve adopted a contemporary and distinctive approach, focusing on the diverse and sometimes challenging moments in the lives of our customers today”