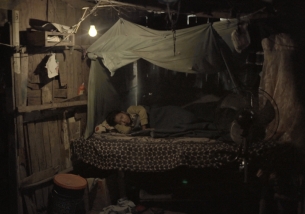 Save the Children is launching a three-year campaign, to ensure millions of children worldwide have an equal opportunity to survive and benefit from access to healthcare and education regardless of who they are or where they live.

The global campaign will be launched with a TV ad created by adam&eveDDB and media planned by 7Stars, which shows the gritty reality faced by Save the Children workers as they help children around the world who are in desperate need.

The film, which breaks today, is shot entirely from behind or from the POV of the aid worker, putting the children as the main focus and shows the lengths that Save the Children will go and the dangers they face down to reach every last child.

Locations include Jordan, Mexico, Bangladesh, Kenya and an Emergency Treatment Centre for Ebola in Sierra Leone – reflecting just some of the countries where Save the Children work on the ground.

The campaign is being launched with a new Save the Children report, Every Last Child, that warns while progress has been made in reaching the world’s poorest children, those from discriminated groups are consistently overlooked, despite being the most at risk.

Tanya Steele, Chief Executive, Save the Children, says: “Our new TV ad, created by adam&eveDDB, kick starts the launch of our three year campaign, Every Last Child, which highlights that millions of the world’s poorest children are being denied life-saving services because of who they are and where they live.”

“As well as hoping to bring in essential income, we want to engage and attract new audiences with this TV ad, so we’ve taken quite a fresh, bold and authentic approach to storytelling. By offering a first-person perspective on the work we do, we are putting the viewers in our shoes and demonstrating what life is like for Save the Children staff. We work in the toughest places at the toughest times and we will do whatever it takes to reach the world's most vulnerable children to ensure that millions of the hardest-to-reach children get an equal opportunity to survive and thrive.”

Mat Goff, Joint Managing Director, adam&eveDDB, says: “This film is gritty and breathless because it’s real. The work Save the Children does on the ground is dangerous, hard and frightening but that is what it takes to reach the children ignored by governments, ostracised by society and stuck in extreme poverty. Save the Children workers are out there right now doing all of this in countries over the world.”