Supported by the International Paralympic Committee, the film from Pulse Films' Sam Pilling supports the 15% of the global population who have a disability 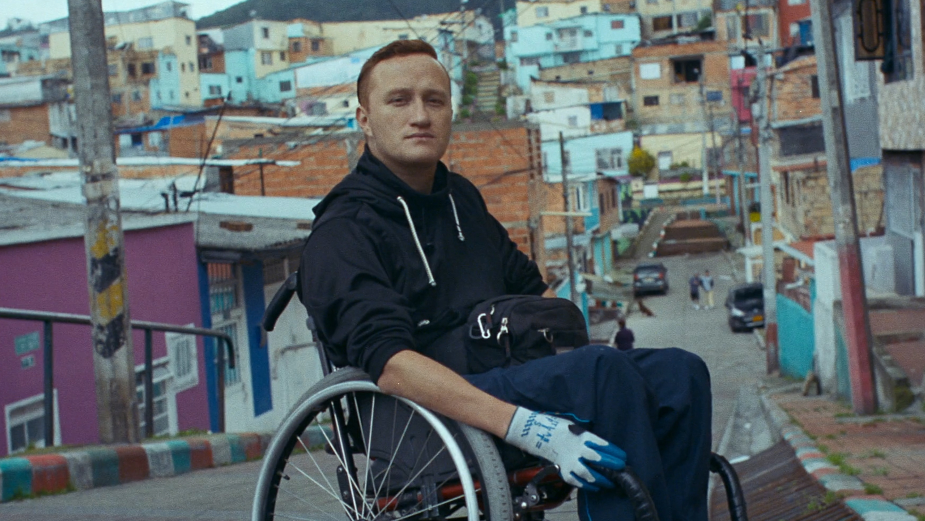 adam&eveDDB is supporting the International Paralympic Committee (IPC) and multiple international organisations to launch a decade-long global campaign that sets out to become the world’s biggest ever human rights movement for the world’s 1.2 billion persons with disabilities.

The movement, #WeThe15, takes its name from the 15% of the global population who have a disability: the world’s largest marginalised group forgotten by the inclusivity agenda. For these 1.2 billion people, access to basic human rights such as healthcare, education and employment, are at best limited and at worst non-existent, making it harder for people with disabilities to live, work, thrive, or even survive.

Spearheaded by the IPC and International Disability Alliance, #WeThe15 sees the largest-ever coalition of organisations unite behind this cause – 20 in total, including UN Human Rights, UNESCO, Special Olympics, and The Valuable 500 - with the goal of putting people with disabilities at the heart of the inclusivity agenda.

The campaign by adam&eveDDB is supported by an identity developed by Pentagram, a film by Pulse Films (and director Sam Pilling), and PR handled by FleishmanHillard, Porter Novelli and Portland. It launches on Thursday 19th August, five days before the Tokyo 2020 Paralympics begin. The Paralympics mark just the start of a 10-year drive for human rights-based progress for the 15%.

Harry Pearce and team’s striking identity for #WeThe15 includes a wordmark, a symbol, and sonic branding by fellow Pentagram partner Yuri Suzuki. The wordmark echoes the hashtag (to ensure maximum visibility across social media) and the symbol is a clear visual representation of what the percentage actually looks like. Throughout the Paralympic Games, athletes will wear temporary tattoos made from the #WeThe15 symbol.

A vibrant shade of purple was chosen for the identity as this represents the international colour of disability. To honour this, a total of 125 iconic global landmarks across 6 continents - from Tokyo’s Skytree to Niagara Falls - will be illuminated in purple light on 19 August when the campaign launches. For the full list of landmarks, see editor’s notes.

Dozens of organisations and brands, including Allianz, Coca Cola, Facebook, Twitter,, Intel, BP, Visa and many more, will show their support by sharing bespoke content, updated logos, and their plans for progressing the inclusivity agenda.

The film, created by Pulse Films and director Sam Pilling, sets out to shift the narrative around people with disabilities away from one in which they are either stereotyped as objects of pity, or put on a pedestal, in order to emphasise that disability is not an ‘other’ - it is humanity. It opens with real quotes that show the way people with disabilities are framed by even the well-meaning, before a cast of people with disabilities challenge viewers to recognise them not through those stereotypes, but as ordinary people who demand true inclusion. Filmed in Bogota, Bangkok, London, Johannesburg, Milan and Manila, the film features nearly 40 persons with disabilities assembled in partnership with disabled talent agency and consultancy C Talent.

Contextual outdoor creative designed by Pentagram, emphasising the scale of the community of persons with disabilities, will run in high-profile sites across the UK, USA, Canada, Japan and France, including a complete domination of Piccadilly Lights in London, supported by Ocean Outdoor, provoking audiences to consider the lack of representation in the world around them. 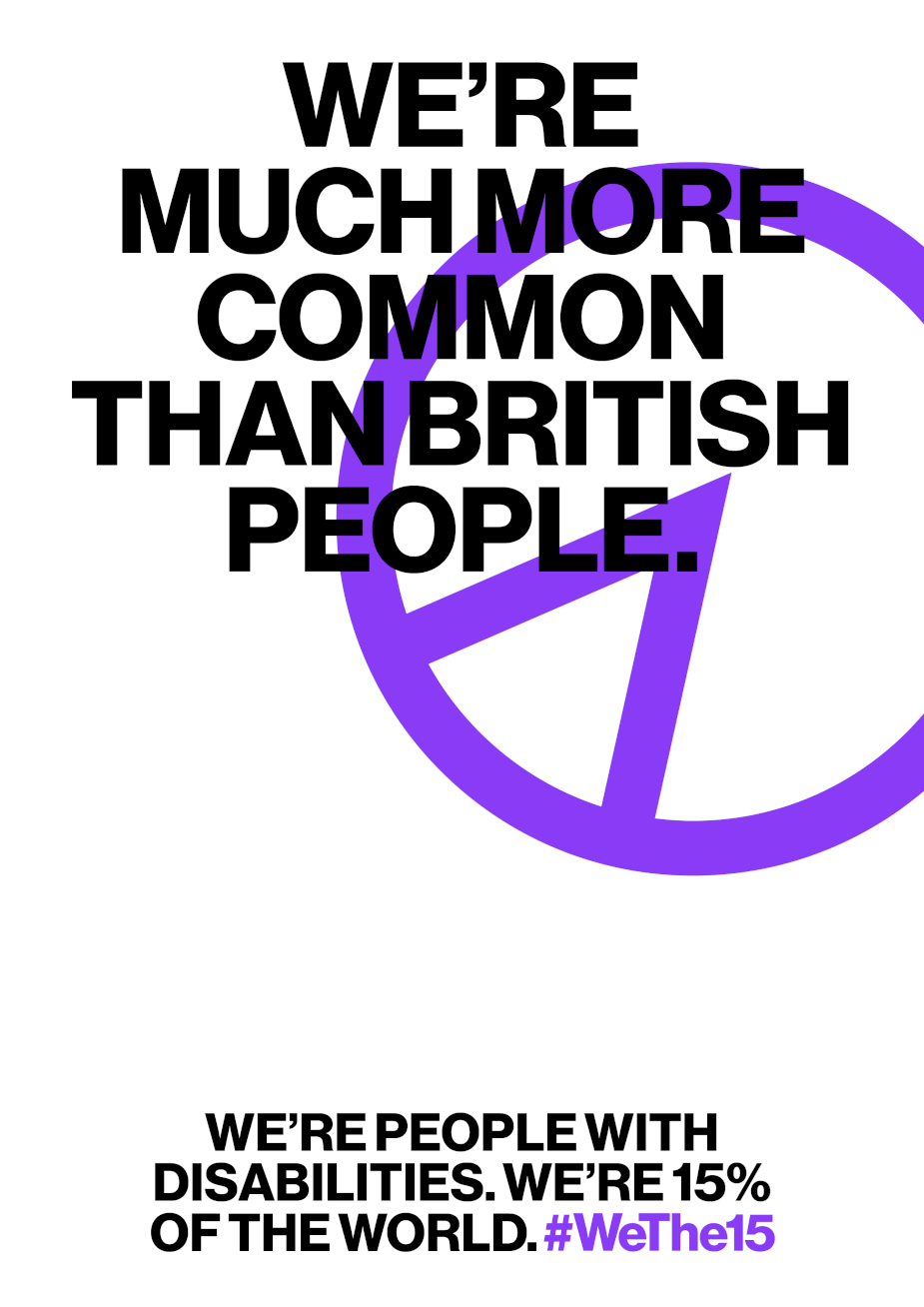 A team of PR agencies are supporting the campaign in the following ways:

Craig Spence, chief brand and communications officer at the International Paralympic Committee, said: “At the IPC we believe that Change Starts with Sport and through #WeThe15 we want to change the lives of the world’s 1.2 billion persons with disabilities.

“By partnering with multiple international organisations to launch #WeThe15 ahead of the Tokyo 2020 Paralympic Games we want to use the platform of the world’s third biggest sport event to spark a decade long transformation for the world’s largest marginalised group.”

Mat Goff, CEO at adam&eveDDB, said: “WeThe15 gives a voice to the biggest unheard group in the Inclusion agenda. This Tokyo 2020 launch campaign is just the start of a movement that will drive real change for over a billion people worldwide. The more brands and organisations and people that get involved in this movement, the louder that voice will be and the faster the change will come.”

Fenella Grey, EMEA managing director at Porter Novelli London said: “We feel hugely privileged to be part of such a powerful movement that will be the catalyst of tangible change, globally. Our involvement has also helped us further shape our own approach to disability both as an employer and as creative communicators – we are committed to applying the disability filter in everything we do. It’s time to close the say-do gap and the 10-year programme will keep us all honest to the cause the #Wethe15 programme stands for.”

Mark Flanagan, Portland’s chief executive said: “We are extremely proud to be part of the WeThe15 campaign, with a focus on improving the lives of the world’s 1.2 billion people with disabilities. As an agency, we are committed to promoting diversity and inclusion in our own workplace and across society, so we are delighted to play a part in this 10-year campaign.”

Jim Donaldson, CEO at FleishmanHillard UK, said: “This is a seminal moment for the IPC and all #WeThe15 partners, with the campaign promising to make a seismic and long overdue difference to the lives of many people around the world. FleishmanHillard could not be more excited to be triggering that change. Often, we find ourselves asking, ‘what can I do to help?’. Registering your support for this movement, critical to advancing the rights of the global disability community, is a welcome start. Change can only begin by communicating, and we encourage everyone to use their voice to support this incredible cause.”

Head of Planning: Will Grundy