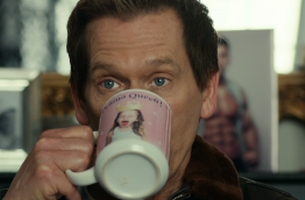 A sleepy English suburb gets the Hollywood treatment with the helicopter-borne star of the EE ads flown in especially to enhance their TV experience.  With innuendo and tea slurping a-plenty, Kevin explains the benefits of EE TV, such as recording four programmes at once and being able to watch them off any device in any room in the house.

Utilising the natural charisma of his subjects, Gary Freedman (of The Glue Society) and Independent Films have created an entertaining, tongue-in-cheek ad, with Adam’s cutting emphasising the easy camaraderie between the Hollywood icon and the home-grown stars. They got on so well Kevin even leaves with Christopher’s lurid pink shorts…

Shot on location in London for 1 day with 4 cameras and 2 helicopters and then for 2 days in New York on a sound stage with another helicopter dangling of a crane, this spot has the epic production values of some of Kevin Bacon’s famous films.

Adam was very excited to met Kevin “I shook his hand and took him through the storyboard in his trailer!” texted the normally very laid back editor on meeting the star.

The Play Room also cut on-line 20” and 60” spots as well as 3 x 30” marketing and retail scripts to round off the campaign.