Adam Buxton On Delving into Saatchi NDS History with BUG

Comedian is set to host Saatchi & Saatchi New Directors’ Showcase 25th anniversary event. We caught up with him beforehand… 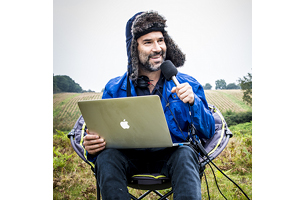 Saatchi & Saatchi’s New Directors’ Showcase (NDS) celebrated its 25th anniversary at the Cannes Lions this year. And while an auditorium-full of lucky Cannes Lions delegates could join in the celebrations, many non-attendees missed out. With that in mind, Saatchi & Saatchi is taking the party around the world, starting in London this Thursday 9th July. The agency has teamed up with BUG, the BFI’s well-respected music video showcase event, to look back into the NDS archive. Comedian Adam Buxton - and regular BUG host - will present a carefully curated reel of classic music videos, ads and short films from some of the best names of the NDS alumni. Ahead of the event, LBB’s Addison Capper caught with Adam to talk music vids, new directors and YouTube comments.

There is more info about and a link to buy tickets for the BUG-NDS event here.

LBB> How did you get involved with BUG?

AB> I think David Knight (editor of Promo News) saw me guest hosting the last Antenna show (Antenna was the BFI’s previous music video showcase). David called me and said he and some pals were starting BUG and wondered if I’d be up for hosting. I said I would be, but only as my character Ken Korda (which was how I’d hosted the two Antenna shows I did). David said he thought it would be better if I was ‘myself’. I’m glad he did. Doing it as a character would have made it too arch. I don’t think people would have stuck it for more than a couple of shows. Even though Ken is a genius...

LBB> You’ve been doing it since 2007 - what was your relationship with music videos prior to that?

AB> I’d always loved music videos. In the ‘80s they were like blasts of art and weirdness that would sometimes pop up on TV and you’d never know when. I remember seeing Aardman’s videos for Sledgehammer, Jackie Wilson’s Reet Petite and Nina Simone’s My Baby Just Cares For Me and I thought they were way better than anything else I’d ever seen. I would sit through saturday morning children’s TV hoping they would show one of them again. I’m a big music fan anyway and when you get a brilliantly executed video married to a great track, no other medium beats the thrill for me.

When I did The Adam & Joe Show with Joe Cornish for Channel 4 in the late ‘90s, we made some videos for our own songs and that lead on to making a couple for Frank Black of The Pixies and Gorky’s Zygotic Mynci, a band I was obsessed with at the time (and still love) and they both turned out well. And a few months after hosting BUG for the first time I made the video for Radiohead’s Jigsaw Falling Into Place  with Garth Jennings. That’s still one of the things I’m proudest of that I’ve been involved with. I like my Ratatouille video too.

LBB> And why do you enjoy doing it? Why is it important for you to be championing creativity like this?

AB> I don’t think much about it being ‘important’. It’s just fun. We (the BUG team) want to give audiences the same jolt of inspiration that I got when I first saw Antenna. There’s more ideas in one BUG show than in a whole year of Hollywood blockbusters.

I guess from the point of view of the directors it’s good to have shows like this which take their work seriously and bring it to a wider audience but I don’t think that’s the reason they make videos. They make them because they’re into it. It’s certainly not for the money.

LBB> The New Directors’ Showcase event is a bit of a crossover between music videos and advertising. How do you see the relationship between the two?

AB> My understanding is that advertising is where a lot of the best craftspeople end up because they get paid to do what they love better there than anywhere else. The problem is that advertisements need to perform a specific function, and because of that there’s a lot of compromise and frustration involved with making them. Music videos are a chance for some of those people to work on something that is often being made for its own sake. They know that they won’t get paid much, if anything, and maybe just a handful of 12-year-olds on YouTube will end up seeing it, but it’ll turn out the way they want it and they won’t have to go back and forth with a client until it’s a mess. Unless they’re making a video for Taylor Swift or someone of her level of success in which case, I’d imagine there’d be quite a bit of back and forth. But they’d probably also get paid…

LBB> How have music videos evolved since the start of the Internet?

AB> Negative: “Why should we fork out 100 grand when this 16-year-old spent six months making something brilliant at home for nothing?"

Positive: 16-year-olds spending six months at home making something brilliant for nothing.

Also, the internet is now an amazing archive for all these works of art (and pieces of shit) that would otherwise never get seen.

And the big budget spectaculars still get made, just not as frequently. I think the world is a more confusing place with the internet in it, but on balance I prefer it, though I reserve the right to change my mind the next time someone I’ve never met is horrible to me online.

LBB> Part of your show is reading some of the ridiculous comments people leave on YouTube videos. Where did that idea come from?

AB> In the course of deciding what videos we’ll include in a show David Knight sends me a long list with links which are usually for either Vimeo or YouTube. When a video is boring me or I feel that I know what's going to happen, I’ll scroll down and see what people are saying. The comments on Vimeo are almost always respectful, constructive and concise. On YouTube it's pretty much the opposite. After the first couple of BUG shows, I started reading some of the comments out loud to myself in silly voices while I was preparing. I liked the way that my own interpretation of other people's comments turned them into something new somehow. I’d read in nuance that may not have been intended and make spelling or grammar errors a part of the ‘characters’ that I was inventing for these people I’d never met. I suspect a lot of other people do that too, so perhaps it’s fun for people to see me doing the same thing on stage.

LBB> If you had to pick a favourite music video of all time, what would it be?

Let Forever Be - Michel Gondry. Still the one to beat I think, though I really love Simple Math by Manchester Orchestra directed by Daniels. There’s so many though… anything by Encyclopedia Pictura is usually worth a look.