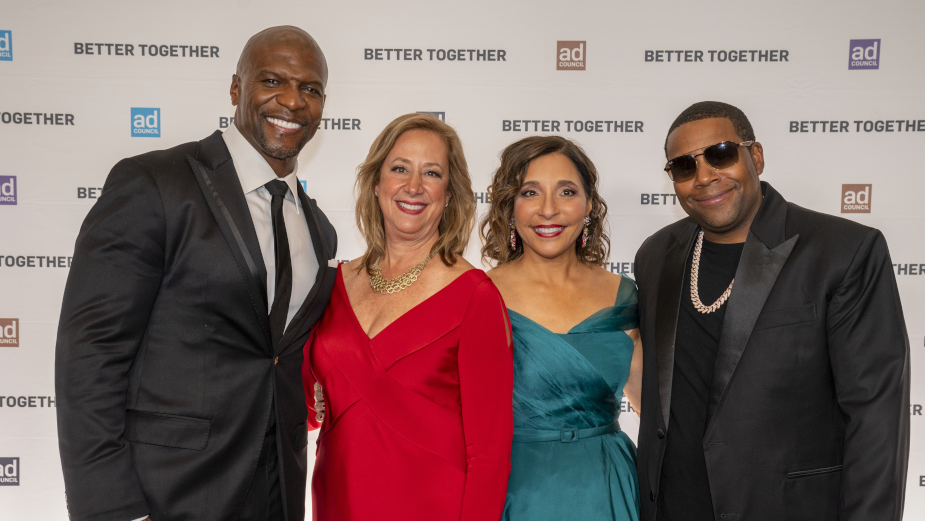 Last night, the Ad Council, America’s leading organisation harnessing the power of communications for social change, held its Annual Public Service Award Dinner. Hans Vestberg, Chairman and CEO of Verizon, was honoured for his exceptional contributions to corporate citizenship, including his support for the Ad Council’s Covid-19 Vaccination Education Initiative. Actor Terry Crews, news anchor Stephanie Ruhle and comedian Kenan Thompson emceed the event, which featured a live performance from the Northwell Health Nurse Choir and a virtual appearance from late-night TV host Seth Meyers. The Annual Dinner was held at the Glasshouse in New York City and raised a record-breaking $6.4 million to support the organisation and its national social impact campaigns.

“The Annual Dinner is a remarkable opportunity to celebrate the power of purpose, and this year it felt particularly special,” said Lisa Sherman, president and CEO of the Ad Council. “Over the past two years we have seen our industry’s most innovative and impactful work yet, as we pivoted to address the significant needs of living through a global pandemic. The impact of this unprecedented industry collaboration changed millions of lives and saved even more. We are truly better together.”

Hans Vestberg was presented with this year’s Public Service Award for his long-established dedication to social good and philanthropy. Under his leadership, Verizon has played a crucial role in securing corporate funders and developing content to support the Ad Council’s Covid-19 Vaccination Education Initiative, the largest public education campaign in national history. In addition to his impactful work with the Ad Council, Vestberg helped author the United Nation’s Sustainable Development Goals as a member of the Leadership Council of the UN’s Sustainable Development Solutions Network. He has also led digital health and climate change initiatives as a founding member of the International Telecommunications Union (ITU) Broadband Commission for Digital Development. Vestberg serves as a Board Member of BlackRock, the UN Foundation and the Whitaker Peace & Development Initiative.

The event highlighted personal stories from individuals throughout the country whose experiences and actions have inspired their communities amid complex challenges since the onset of the pandemic, including:

The Dinner was co-hosted by actor Terry Crews, news anchor Stephanie Ruhle and comedian Kenan Thompson. Crews, host of ‘America’s Got Talent,’ is best known for his roles on sitcoms ‘Everybody Hates Chris’ and ‘Brooklyn Nine-Nine.’ Ruhle, a senior business analyst for NBC News, anchors both ‘MSNBC Live with Stephanie Ruhle’ and ‘MSNBC Live with Velshi & Ruhle.’ She previously served as anchor and managing editor for Bloomberg Television and editor-at-large for Bloomberg News. Seth Meyers of NBC’s ‘Late Night’ introduced the evening and co-host Kenan Thompson, a double Emmy nominee this year for his work on ‘Saturday Night Live’ and ‘Kenan.’ Thompson has starred as a comedian on ‘Saturday Night Live’ since 2003 and currently plays the title role in the sitcom ‘Kenan,’ which premiered this year.

The Northwell Health Nurse Choir was formed in 2020 when the group of talented frontline workers gathered virtually for the first time to support Nurse Heroes, a nonprofit initiative helping to solve the nurse shortage through raising awareness and providing funds for nursing scholarships. Since forming the group as strangers from different hospitals and nursing specialties across New York, the Northwell Health Nurse Choir went on to finish as a Top 10 Finalist on season 16 of “America’s Got Talent.” The choir continues to use its platform to represent nurses and frontline workers through the power of music.

The Ad Council has been honouring corporate leaders for their contributions to public service since 1953. The Public Service Award Dinner is the organisation’s largest fundraising event. The event is annually ranked by BizBash as one of the top advertising events of the year.

Proof of vaccination and a negative Covid-19 test were required for all those in attendance and working the event, which followed New York City’s latest health and safety guidelines. For those unable to attend the event, there will be a one night only virtual event on December 14th.