Publisher teamed up with AKQA to create a unique, innovative way of revealing the new Call of Duty title 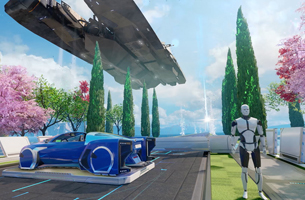 For the first time ever, the characters and story line from one Call of Duty title - Call of Duty: Infinite Warfare - invaded another, with Call of Duty: Black Ops 3 experiencing a 'Hostile Takeover' this past weekend.

A classic good vs evil battle, Infinite Warfare's SetDef broke into the B03 Nuk3town map, until Lt. Reyes and the SATO forces fought back, sending fans on an epic interactive journey. Through an out-of-game social experience via the conduit of Facebook Messenger, this campaign allowed fans to decipher a code and interact with a character from the new game.

The recent changes to Facebook Messenger is allowing brands to interact with consumers through innovative ways, and Activision is among the first to utilize this new tech in imaginative ways.

Here's what happened over the weekend:

Threat Appears | Friday 29 April at 10am PT: SetDef's villainous lead ship, the Olympus Mons, appeared at the end of every Nuke3town multiplayer match.

Hero Rallies Fans | Sunday 1 May at 10am PT: Lt. Reyes broke through and drove fans to the only secure comms channel: Facebook Messenger.

Trailer is Unlocked | Monday 2 May at 9am PT: Through Facebook Messenger, Lt. Reyes instructed fans to search Nuk3town and the web for a 12-digit code that unlocked the trailer.

Todd Harvey, SVP Global Consumer Marketing, Activision said: "For the reveal of Infinite Warfare, our goal was to create a massive social event that fans wouldn't just witness, but would experience together as it unfolded, both in-game and across all Call of Duty social channels. We recognise that our audience spends a great deal of time engaging with Call of Duty both inside and out of game, and the 'Hostile Takeover' reveal program was designed to engage our fans where they are, online, having fun, playing Call of Duty."