Active and Ideaworks by Y&R Wins Best in Show at the Shop! 2018 Marketing at Retail Awards

Agency won Best in Show for Myer 'Santaland', which took out several of the major prizes on the night 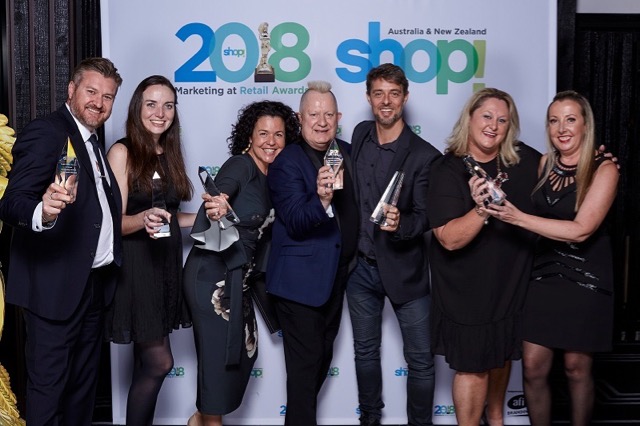 Active and Ideaworks by Y&R last night scooped the major prize in an event celebrating Australian Retail Marketing, taking home the Best in Show Award for its Myer Santaland concept at the Shop! (formerly POPAI) 2018 Marketing at Retail Awards. As well as scoring 5 awards, the agencies are celebrating back to back wins of Best in Show and Pinnacle Awards for Innovation/Design and Shopper experience having won these coveted awards two years in a row.

Says Danny Lattouf, regional head of retail for Y&R and IdeaWorks MD: “We’re a customer experience design agency – our entire business is driven by the Y&R people first philosophy. RCX (Retail Customer Experience) is at the very heart of everything we do. With the customer first, delivering the right communications, experiences and engagement between brands and customers is something we take a lot of pride in doing. We have been fortunate to work with incredible partners and being recognised by POPAI and our industry over the course of the last three years in such a way has been truly humbling. It just reinforces the importance of putting the customer at the centre of everything we do.”

Best Display was awarded to Spark and Ainbow's Star Wars: The Last Jedi for The Walt Disney Company, while PepsiCo and XPO Brands won the People's Choice Awards for Doritos Crackers.

In the two largest and most tightly contest categories - Integrated Path to Purchase and Occasion-Based Campaign, Convert Communications and Edelman won two Golds for their Sprocket Mother Day entries for HP Australia.

Experiential, the fastest growing category of the Shop! Marketing at Retail Awards program, saw Myer Santaland by Active and Ideaworks by Y&R take home Gold, while Silver went to The Round Table's Project Botanicals for Bacardi- Martini and Bronze to Myer's Giftorium Christmas Experience by Active.

In Health and Beauty, Gold prizes went to Revlon's Youth FX Floor stand by POP This POP That in Temporary, and EDA's Bvlgari Travel Retail system for Permanent.

The annual Shop! ANZ Marketing at Retail Awards recognise and reward best practice, innovation, and excellence in retail and shopper marketing across Australia and New Zealand. Now in their 20th year, the Awards span 22 categories, covering physical display (both permanent and temporary) and shopper experience.

2018 is the Awards biggest year ever, not only attracting a record number of entries at 222 (65 more than 2017), but also the highest standard right across the board.

Carla Bridge, Shop! ANZ general manager, said she was blown away by the quality of entries, with the 2018 competition incredibly tight.

Says Bridge: "While every year has stand-out entries, this year our Awards program was especially competitive, owing to the high calibre of the campaigns submitted.
"There was a noticeable lift in the standard of entries right across the board, in most categories, there were several worthy winners, however, we were only able to Award Gold, Silver and Bronze in each category.

"We've seen a surge in popularity in the non-traditional Shopper Experience categories. While the more traditional Physical Display categories remain as strong as ever, 2018 has really been a tipping point for newer disciplines such as Digital and Experiential."

To achieve Gold, Silver and Bronze Awards, entrants must hit set scores - in the case that a score is not met in a category for that year, no prize is awarded.
Bridge congratulated all the winners of the 2018 Awards.
Says Bridge: "These Awards are a true testament to the strength and success of retail marketing in Australia and New Zealand and prove that the sector is a robust and indispensable element in the retail mix."
To view the 2018 Shop! Marketing at Retail Awards entries and images, visit the Shop! website, www.shopassociation.org.au.
view more - Awards and Events