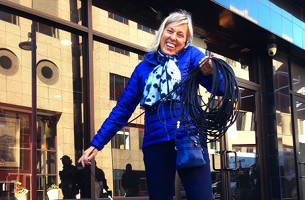 ACNE has announced the addition of Swedish Managing Director and Broadcast Executive Producer Line Postmyr in Los Angeles. Postmyr joins the team with over two decades of award-winning work on commercials, music videos, and feature films. She aims to expand ACNE USA’s offering to match that of ACNE Sweden which includes commercials, music videos, photography, and long-form projects.

Postmyr has spent her career in production working with some of the world’s biggest brands, resulting in campaigns for Nike, Levi’s, Mercedes, Honda, and many more. In addition to global brands, she has worked alongside a star-studded roster of directors: Spike Jonze, Mark Romanek, Fredrik Bond, and Jonas Åkerlund. Postmyr has worked on several DGA nominated projects and, to date, she has always had at least one spot in the Super Bowl.

Outside of the commercial world, Postmyr has substantial film experience having produced shorts, feature films, and documentaries for powerhouse directors including Gore Verbinski (The Ritual), Mario Van Peebles (Juliette), and Neil Abramson (NetAid). She also helped produce the Los Angeles portion of Danny Boyle’s flick A Life Less Ordinary starring Ewan McGregor and Cameron Diaz. In the music space, Postmyr has produced videos for some of the most iconic artists in the world such as, Madonna, Nirvana, Tina Turner, Red Hot Chili Peppers, Iggy Pop, and Björk.

“I have known Line for quite some time,” ACNE CEO Jesper Pålsson explains. “She is an eternal optimist with boundless energy and a ‘can do’ attitude. As a producer, she is an extremely skilled and creative problem solver who never takes no for an answer. All that, combined with her deep experience in commercials, and vast network in the industry makes us super excited to have her on board.”

As ACNE’s Broadcast Executive Producer, she will oversee all commercial efforts and will use her substantial experience to swiftly guide projects from delivery to broadcast. Prior to ACNE, Postmyr worked as a freelance producer and from 2008 to 2010 she served as Managing Director at production company HELLO!