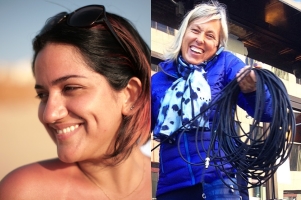 Leading integrated production house ACNE is pleased to announce the appointment of CEO/Executive Producer Line Postmyr to lead the North American office. Postmyr rises to the position from within the company, having previously held the title of Managing Director/Executive Producer. The promotion comes in tandem with the hire of Executive Producer Rania Hattar, a well-respected industry mainstay with multinational experience, who arrives fresh off a successful stint as EP at Little Minx. With these two dynamic women at the helm, ACNE enters into an exciting new era in line with the company's knack for setting trends.

Line Postmyr has produced an impressive body of award-winning campaigns throughout her career, having collaborated with A-list directors such as Fredrik Bond, Tony Kaye, Spike Jonze, Mark Romanek and Bruno Aveillan. She’s held top posts, most notably as the former Managing Director at HELLO!, and has produced for other leading companies including MJZ, Smuggler, Anonymous Content, RSA and Sonny London, to name a few.

Postmyr has been an integral force in forming ACNE’s reputation as a company that strikes a harmonious balance between commercial realism and edgy creativity, producing advertisements that often steal the spotlight straight from the broadcast content they are cutting into. Her experience driving projects ranging from tiny low-budget productions to multi-million dollar campaigns has allowed her to position ACNE as a versatile company with the flexibility to produce commercials and content of any scale.

The evolution of Rania Hattar's career in LA after producing features, commercials, music videos and stills in Europe, Asia, Africa and the Middle East reflects her ability to facilitate all facets of the production process. She cut her teeth working alongside the EPs at MJZ, guiding projects from pre-production to flawless final delivery for 14 directors out of a roster of 23, including Michael Mann, Nicolai Fuglsig, and Fredrik Bond.

The combination of Postmyr and Hattar’s top-level experience becomes all the more potent at ACNE, where they’re given the creative freedom to add their own personalities and encouraged to cross the line rather than toe it.

ACNE's spirit of collectivity and its multidisciplinary full-service network is what drew Hattar to the production house. “Acne is a powerhouse that can approach the client with capabilities to do everything in-house,” she remarks. “If we do a spot or a TV project, we also have the ability to create integrated content, immersive events, live events or an app for it.”

Hattar continues, “Here, it’s not just a torso, but a body with all the fingers and toes and moving parts. Everyone can collaborate and melt into the different parts of ACNE, allowing us to create in virtually every way, shape, and form, from commercial and interactive content, to fashion, photography, toys, computer games, advertising, furniture, magazines, live events, and theatre.”