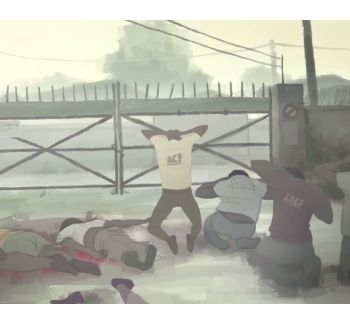 The ONG charged TBWA\PARIS with the task of making the public and the international community aware of the frightening acts that have marked the last few years: beyond the brutal Muttur crime, the ONG’s concerns include the overall security of humanitarian aid workers.

This poignant film illustrates the dramatic consequences of a crime against humanitarian aid workers. It will be released this March, while the 25ème United Nations Human Rights Council meets in Geneva to examine and deliver a resolution on the Sri Lanka. Attacks and threats to humanitarians, like that of the Muttur assassination, deprives the most vulnerable from getting vital aid. Basically, killing an aid worker is punishing those he/she helps.

Mathias Lachal and Julien Vray were asked by TBWA/Paris to produce this film. They were both moved by the Muttur tragedy and the political obscurity that surrounded the event. Using the force of powerful images, they decided to join ACF International and TBWA in the fight for justice.

After graduating from the École Emile Cohl in 2001, Julien Vray joined Fémis (ENSCI) in 2002. In his final year of studies, he released a short animated film called 'FBIzoo', which has won many awards in festivals. Julien produced many commercials for the French brand sneakers Feiyue, and later joined the production company Caporal Films in 2012.

Mathias Lachal also graduated from Emile Cohl (2010). He has produced commercials and animated films in 2D, including the magnificent 'Chute'.